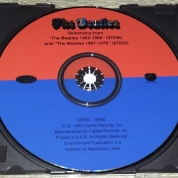 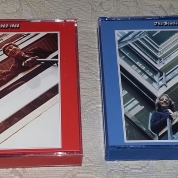 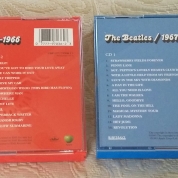 Discs and booklets for 1993 US CDs

Rear of 2010 US Remastered CDs 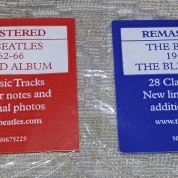 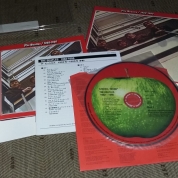 The Beatles are one of the only rock groups who would need two, count them two, double albums to cover their greatest hits!

First released in 1973, these collections called “The Beatles 1962-1966” (the ‘Red’ album) and “The Beatles 1967-1970” (the ‘Blue’ album) cover the entire span of The Beatles recording career and have been huge sellers in all formats they’ve been released on from vinyl to 8-Tracks to compact disc and even the dreaded download (he said with a smirk).

They’re a great place to start if you’re new to The Beatles music and they’ve served as great starting points for several generations of “Fab Four” freaks – me included.

You see the first Beatles record I ever owned was the “1962-1966” set which I got in 1975, a couple years after it was released. I remember staring at the front and back cover of the album as it played and being amazed at how much the band’s image had changed over such a short time.

Of course I knew most but not all of the songs already and played that set over and over again that year as my love of the Fabs music grew from a spark into a raging wildfire!

I loved the early years of The Beatles so much that the next Beatles album I acquired was an Apple pressing of the Capitol album “The Beatles’ Second Album”. I didn’t get the “1967-1970” collection until a couple of years later but I remember checking it out from my local library before I bought it.

At that young age, nine years old, I liked a lot of the songs on the “Blue” set but was kind of perplexed by some of the more adventurous tunes like “Strawberry Fields Forever” and “I Am the Walrus”.

By 1977 The Beatles later years had become some of my favorite music they ever produced and I ended up playing the “Blue” set a bit more than the “Red” one over time but my love of all things Beatles started with the “1962-1966” set so it has always remained a favorite of mine to this day.

Nowadays I tend to reach for a specific Beatles albums when I want a “Fab” fix because there’s so much more to The Beatles catalog then just their hits but I have to admit that these two collections hold a special place in my heart for sure.

Today I’m highlighting the CD versions of these sets that have been released over the years along with some groovy promo CDs that were put out to promote them.

The first time these albums made it to store shelves in CD form was 1993 and I remember fans being very perturbed that the “Red” set was released as a two CD set when in fact it could fit onto just one CD.

The Beatles company Apple stated that they wanted the albums to go out as they originally did on vinyl as double sets but that didn’t sit well with most hardcore fans though of course these CDs ended up selling well of course.

I wasn’t too concerned about the two CD controversy as I was (and still am) a rabid Beatles collector and very sentimental about these albums and welcomed their release on CD.

The thing I really loved about the 1993 CD version of the “Red” album was that it was the first time five early Beatles songs were released on CD in stereo – “All My Loving”, Can’t Buy Me Love”, “A Hard Day’s Night”, “And I Love Her” and “Eight Days a Week”.

I LOVED hearing the stereo versions of these songs and it whetted my appetite for all The Beatles early albums to be released on CD in stereo.

(Note: in 1993 the first four Beatles albums were only available on CD in mono and Apple at the time wasn’t too concerned about getting early Beatles music out on CD in stereo though this was a step in the right direction)

I still think these five tracks sound really nice on the 1993 CD especially “A Hard Day’s Night” which is the best stereo version of this song available on the CD format (the 2010 remaster is a bit too muted compared to this version).

The “Red” and “Blue” sets were re-issued again in 2010 this time taken from the 2009 remasters of The Beatles work in which all stereo and mono mixes were made available on CD.

I tend to reach for the 2010 remastered versions of these sets if I play them as I think overall the 2009 remasters sound great.

Of course my CD of choice for these albums are the lovely 2014 Japanese SHM-CD mini-lp CDs versions of these sets that have been released as limited editions in the Land of the Rising Sun.

I’m not going to go over the whole “do SHM-CD’s sound better bit” but needless to say these sets LOOK fantastic as they faithfully re-create the original UK vinyl versions of these albums to a tee down to the correct inner sleeves and disc labels.

If you’re going to collect physical media then why not get the best and most attractive versions of your favorite music – says the great rationale(r) lol.

As usual above you can see photos of all these CD variations I’ve mentioned in this blog post.

I’ve also thrown in two promo CDs for these sets that came out in 1993 to promote the original CD releases of these albums.

The first promo CD is a radio sampler featuring six songs from the “Red” and “Blue” sets and the other one is a UK promo CD that features a nice interview with Beatles producer George Martin talking about various songs on both albums.

You don’t see the interview promo CD much these days so I thought other Beatles collectors might get a kick out of seeing it.

Hopefully you’ll enjoy this Beatles geekout on these two wonderful collections and if you’ve never sampled any Beatles music these two sets are a great place to start even if you’re not into physical media and want to sample them online.

And if you do want to dip your toes into the physical media water these two sets are plentiful in used bins around the country in either vinyl or CD so this again makes a great place to start a Beatles fixation … err, collection.

Until next time, be well and sit back and relax with one of these albums playing in the background – ahhh!!!