Okay, there’s no better way to start a Sunday morning than to make a record martini.

First you start with two British 45’s. You want to make sure you have vintage stock from 1962/63 as the mixes must be very dry.

“Please Please Me/Ask Me Why” – British 45 on either the first pressing red label (which I’ve yet to find at a decent price) or as a substitute a later 1963 pressing on the regular black Parlophone label.

Of course any UK 45 pressing of this single will do as until the 1980s all pressings used the dry mixes of the songs but let’s stick to 1963 pressings for today to keep your martini vintage.

You then take these two 45’s and give them several spins on the turntable of your choice. Make sure to spin them quite liberally so they’re shaken just right and play quite loud as to make sure your breakfast record martini comes out perfectly!

Okay, what I’m talking about – in my usual obtuse (not a word you hear much these days lol) way – are the original UK pressings of The Beatles first two singles.

These singles have less echo than their album counterparts thus they are called the dry versions of these songs. Of course these singles are only available in mono as all British Beatles singles were released in mono only until 1969.

Plus, the “Love Me Do” single is only available in mono ANYWHERE as it was never mixed into stereo as the multi-track tapes were destroyed shortly after the single was released.

Any “Love Me Do” or “P.S. I Love You” on stereo pressings are in fake stereo (bleak) anywhere in the world. More on fake stereo down the road.

I must say those new to vinyl or those oldies out there who don’t have many 45’s should really investigate the original 45 pressings if you can find them in decent shape and for a decent price.

Yes they can be a pain to play and clean them and you have to get up several times to flip records etc., but they really are the best way to hear the biggest hits of 1960s artists, The Beatles included.

You can always make digital transfers of your 45’s , or needledrops as they’re called, as they really sound terrific even on a CD (or any digital transfer) and then you have the best of both worlds.

As for these two Beatles 45’s the songs just sound so damn good – the best way you’ll ever hear these songs. You can see why The Beatles really caught on as even over fifty years later these songs just burst out of the speakers and sound so  punchy, clear and dynamic.

I’m not sure if it’s the compression that was added to the 45 mixes when they were transferred to vinyl or if the Brits just knew how to make 45 records but these songs just have more life and pleasure on these than any other format including cassettes, 8-tracks, CDs or future chip implant lol.

So, feast your eyes on these two original pressings that I own below. Oh and also dig the groovy company sleeves that these come in. Like the hype stickers, I love to collect singles with their original company sleeves like the ones on these Parlophone 45’s.

I also threw in a photo of an original UK “I Feel Fine” 45 to show you what that company sleeve looks like as well and also  a newer 45 pressing of “Love Me Do” that was released a couple of years ago with a replica Parlophone sleeve.

Enjoy! But don’t drink too much, it’s only Sunday morning. Cheers!: 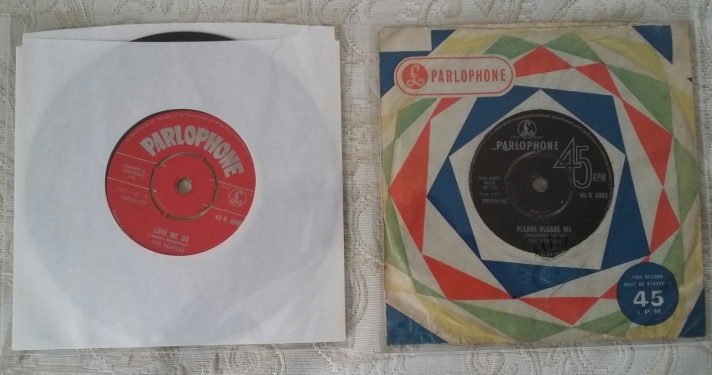 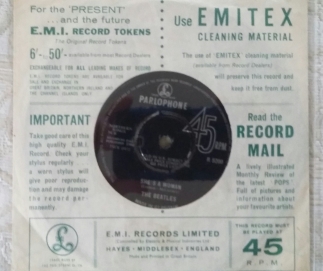 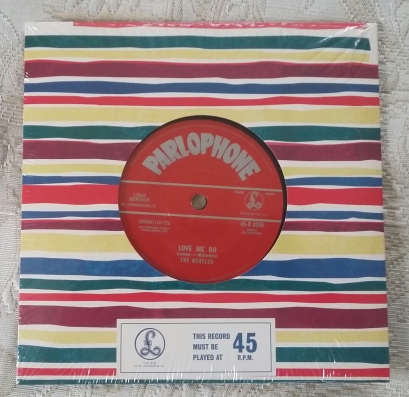