For those of you who’ve been exploring any of my previous posts here in Collector’s Land, better known as my Records, CDs and Music blog, today I’m going to take another look at the elusive hype sticker.

Hype stickers, as I’ve said previously, come on either a sealed album or CD and usually promote the hit single from that particular album or, in the case of many of the items I’m showcasing today, the exclusive freebie that’s contained inside the package.

Best Buy, when it used to actually STOCK CDs, was particularly good at enticing the greedy collector with exclusive content if you bought the CD from their stores.

Items from ranging from 45’s, tote bags and photo cards to bonus CDs with exclusive tracks and DVDs with bonus footage where dangled in front of collector’s wallets and, as I am somewhat embarrassed to say, I usually took the bait!

Below are quite a few Paul McCartney exclusives from Best Buy and Target stores but there are also a few interesting banner cards or Japanese OBI type strips that I found on certain CDs and never saw again.

Btw, an OBI is thin strip of paper wrapped around a vinyl album or CD and is common on Japanese music products. Some US record companies use that OBI style on their music CDs and vinyl from time to time as well.

The lone Ringo Starr exclusive Best Buy CD in the photos below reminds me how glad I am that we live in the age of buying from the Internet.

The Ringo Starr CD entitled “Vertical Man” came out in 1998 and in those days I remember having to get to the Best Buy store just at the right time to hunt the shelves for the two or three copies of the exclusive CD they had buried in back somewhere.

You usually had to be there right near opening in the morning and then you had to chase down a doe-eyed young store employee who usually just stared at you in a foggy haze as you frantically spelled the artists name until they said they didn’t stock that item.

I remember that happened with this Ringo Starr CD when from the corner of my eye  I happened to look over at a cart waiting to be shelved and pulled the CD out and said, “You mean this one?”

One thing my older age has taught me is if I can’t get it online or mail order, it ain’t happening!

“Oh, you can bet I never let the things I get,
Get the best of me.
When I get blue, here’s what I do and so can you,
It is no mystery when you sing.
La de da, like que sera, whatever la de da”

(The last two photos include a special slipcase packaging for Paul McCartney’s “Driving Rain” CD as well as his withdrawn CD single for “From a Lover to A Friend” from that same album.) 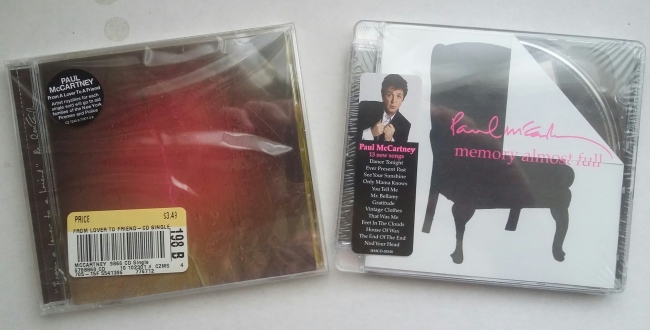 Fifty years, my how time flies.

I remember it just like it was yesterday when I was … one?

Okay I really don’t remember 1967 at all but fifty years ago today The Monkees last number one single called “Daydream Believer” was released and made its way to hearts of millions of fans around the world.

Whenever I hear that delicate piano intro, played by Peter Tork, I’m instantly transported to a carefree time sitting in front of a small record player on the floor as a child playing that song over and over … and over (just ask my siblings lol).

Anyway, since the “Daydream Believer/Goin’ Down” 45 is celebrating the big 5-0, I thought I’d commemorate the occasion in true collector’s (hoarder?) fashion by sharing all the CD versions I own of the album on which “Daydream Believer” makes its home.

As Monkees fans know, “Daydream Believer” came out shortly before The Monkees’ fourth album entitled “Pisces, Aquarius, Capricorn and Jones, Ltd.” which was released in November of 1967.

Surprisingly “Daydream Believer” wasn’t a part of that album but instead was released several months later in the spring of 1968 on an album called  “The Birds, The Bees & The Monkees”, the group’s fifth long player and fifth gold album.

Technically “Daydream Believer” is really a part of the sessions for “Pisces, Aquarius, Capricorn and Jones, Ltd.” but since this is my blog and I love a good anniversary as much as anyone I thought a look at the various CD releases of “The Birds, The Bees & The Monkees” would be fun.

Note: I spent years not being able to buy new copies of my worn out original Monkees albums which had gone out of print so now I’m obviously over compensating – as you may be able to tell lol.

Most of the CD issues of “The Birds, The Bees & The Monkees” sound similar but the one that I’m most sentimental about would have to be the first compact disc issue of this album from Japan in 1992 on Arista Records.

It has a slightly different back cover and is mastered very well and I remember being thrilled to death to see it released on compact disc as I wasn’t sure if all The Monkees albums would make it to this new digital format.

The 1994 Rhino CD release of “The Birds, The Bees & The Monkees”, which sounds just as good as the Japanese disc, includes some terrific alternate versions of songs as bonus tracks. Because of that it’s probably my favorite go to single disc version of the album available on CD.

The cream of the crop reissue of “The Birds, The Bees & The Monkees” arrived in 2010 as a Super Deluxe box set and was made available as an online only release by Rhino Records on their Rhino Handmade imprint.

Consisting of 3 CDs, a booklet and a bonus 45, this magnificent box set includes remastered versions of the stereo and ultra rare mono Lp mixes as well as dozens of outtakes, alternates and rare mixes.

The box set sold out pretty quickly – only 5,000 copies were made – and is pretty expensive these days. Of course this now expensive box set is the best representation of this album and the truly sprawling sessions that the group undertook to make it.

By the time “The Birds, The Bees & The Monkees” was recorded in late 1967/early 1968 The Monkees were no longer working together as a self-contained quartet in the recording studio as they mostly had on their third and fourth albums (“Headquarters” and “Pisces, Aquarius, Capricorn and Jones, Ltd.”).

Each group member was now going into the studio by themselves and creating music produced under The Monkees banner but made individually with top session players; more in line with the way the first two Monkees albums – “The Monkees” and “More of The Monkees” – were made.

This created a HUGE backlog of finished songs that ended up languishing in Colgems (Sony/Columbia’s) vaults until they were rescued from obscurity by Rhino Records beginning in the 1980s.

Some of my personal favorites from the Deluxe box set include “My Share of the Sidewalk” (written by Mike Nesmith with versions sung by both Nesmith and Davy Jones), “Ceiling in My Room” (a reflective Davy Jones ballad), “Come On In” (a lovely Peter Tork track) and “Nine Times Blue” (a Mike Nesmith tune sung by Davy Jones).

Other quality tracks that are a thrill to hear include Micky Dolenz’ proto-punk “Rosemarie”, early mixes of “Through the Looking Glass” (later found on the “Instant Replay” Lp) and Peter Tork’s acid rocker “Long Title: Do I Have to Do This All Over Again?” (later found on “HEAD” soundtrack Lp), a wonderful early version of “The Girl I Left Behind Me” (sung by Davy Jones) and “(I Prithee) Do Not Ask For Love (Second Recorded Version)”.

The set also includes some really interesting backing tracks, songs before vocals were added, including “We Were Made for Each Other” which was produced by Chip Douglas (esteemed Monkees producer) and “Wasn’t Born to Follow” which was finished in 2016 with a lovely Peter Tork vocal and put on The Monkees 50th reunion album “Good Times”.

The outtakes and rarities on this set really flesh out the sessions for “The  Birds, The Bees & The Monkees” highlighting a variety of musical styles ranging from country, folk, pop, rock to a bit of Broadway thrown in for good measure courtesy of Mr. Jones.

This exhaustive box set really showcases the group as quality songwriters, producers and performers. Not bad for the cast of a TV show that really wasn’t a group when the Monkees project began.

The two latest issues of this album on CD, from 2012 and 2016, are taken from the stereo version that comes from the Super Deluxe box set.

Whew, so there you have it!

Happy 50th birthday “Daydream Believer” and help yourself to a sampling of the album it’s found on – “The Birds, The Bees & The Monkees”; a lovely example of some terrific, melodic, sometimes psychedelic, sometimes bizarre pop/rock goodness.

Below you’ll find photos of all of the CDs mentioned except the 1994 Rhino CD which is seen as part the photo at the top of this page: 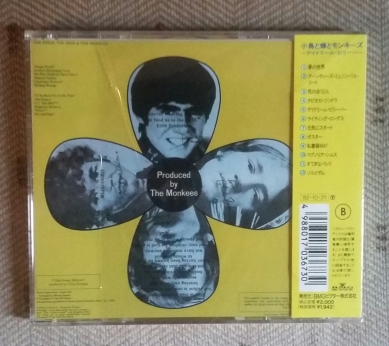 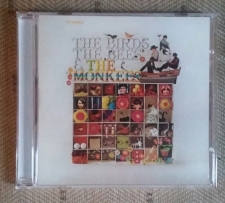