“Ram” by Paul and Linda McCartney.

Does it ring a bell?

If you’ve never heard it, you really should give it a try. It’s a great album!

Probably one of the best solo Beatles albums ever released and there are quite a few excellent ones; definitely in my top five along with “All Things Must Pass”, “Imagine”, “Band on the Run” and “Ringo”.

Top five you say? Wasn’t that album practically panned when it came out in 1971?

Well, yes it was BUT you see dear readers hindsight has revealed that much of the music press at the time had a huge grudge against McCartney who was seen as the man who broke up The Beatles.

“Ram” was Paul McCartney’s second full solo album (third if you count “The Family Way” soundtrack which I’m not lol) away from The Beatles.

McCartney’s first album, titled simply “McCartney”, was practically a one-man show with McCartney playing all the instruments himself and recording much of it at his home.

Critics weren’t overly fond of that first solo album and really had their knives out for McCartney’s second release especially since he credited his wife Linda as co-writer and performer, which to say mildly didn’t go down well.

Taken out of the context of its time, Paul and Linda McCartney’s “Ram” is one hell of a great record. It was lushly produced and more in line with a Beatles style production than what McCartney had done on his first solo album.

The songs and production on “Ram” have a very whimsical quality about them and are filled with slightly mad characters like Uncle Albert from the No. 1 U.S. hit “Uncle Albert/Admiral Halsey” and slightly mad takes on the world like the almost manic “Monkberry  Moon Delight” along with dream like interludes like the songs “Long Haired Lady” and the ukulele based “Ram On”.

With musical styles ranging from rock to pop to country to almost psychedelic, “Ram” takes listeners on an aural journey filled with rich textures and swaths of color much like the musical equivalent of an impressionist painting.

Even the brightly colored cover of “Ram” with it’s cut out photos and scrapbook like  appearance suggest an almost adult comic book feel which along with the music makes the album stand out as some sort of post psychedelic reaction to the 1960s.

Well, at least to me.

You see as a second generation Beatles fan I discovered “Ram” in the summer of 1976, the same summer I discovered The Beatles’s “Magical Mystery Tour” album.

I had no preconceived notions of McCartney’s music, I was just taking his career as one big whole – Beatles music and solo music were all one thing to me.

In fact it’s funny how “Ram” and “Magical Mystery Tour” fit so well next to each other. Both are slightly mad and colorful and both are impressionistic.

“Ram” has always seemed to me to be a natural extension from the music of “Magical Mystery Tour”.

That’s why I believe some of McCartney’s solo work has been seen in a much different light lately as the cloud that surrounded The Beatles break-up is long gone and people now look at the music more on its merits than its history.

Anyway, take a look at some of the different “Ram” pressings in my collection. The first copy of “Ram” that was given to me was on the black Capitol label (see below).

I also have an original U.S. copy (in shrink wrap), a copy from France, a copy on the Columbia label (from McCartney’s short stint on that record label) and a lovely copy of the mono pressing which was released a few years ago in 2012.

The mono copy comes from a true mono mix of the “Ram” album that McCartney made for radio use in 1971 when the album was released.

When the “Ram” album was given a special re-issue in 2012 as part of McCartney’s Archive Collection this rare mix was released on CD as part of a big box set as well as this limited vinyl pressing.

The mono mix is fantastic sounding and well worth seeking out if you are or become a fan of this album.

To quote Paul McCartney – Ram On! 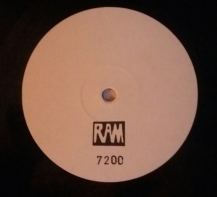 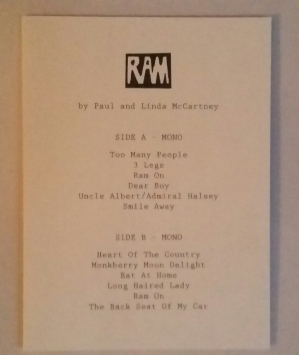 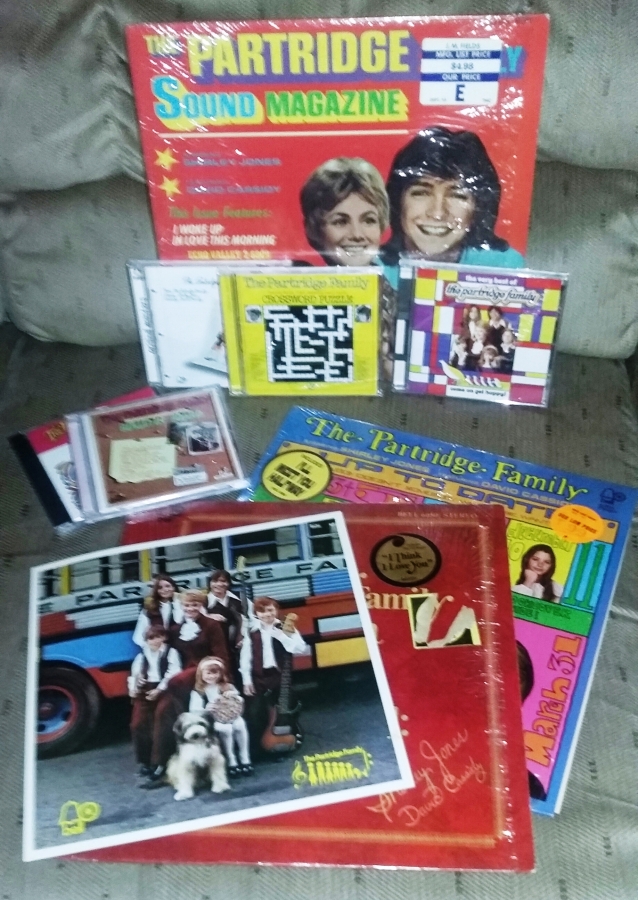 Well, here we are again.

It feels like the brisk Autumn night it is as I sit down to write this little merry post.

For tonight’s episode, I’d like to take you back a few years. Quite a few years in fact.

Say 47 years or so, give or take a few depending on your mileage.

First let me stop right here  … I have always been obsessed with music.

My older two siblings, one who is nine years older than me and one who is eight, have told me me that even when I was in diapers I would drag myself over to the edge of the old huge console-style Magnavox stereo my parent’s owned and dance to music.

Usually music from my older brother’s records, of course, which I helped put a ton of miles, and scratches, on!

Anyway, knowing this fact will hopefully make the following stories seem less strange. Okay, I was a strange kid, I admit it lol.

Two of my fleeting memories from 1970 both involve The Partridge Family.

Yes, the TV show and recording act that most folks reading this over the age of forty will recognize.

The Partridge Family show was a very big hit that also produced several million-selling singles and albums by the fictional group that featured vocals from two of the show’s stars – lead vocals by David Cassidy and background vocals by Oscar-winning actress Shirley Jones (also Cassidy’s step-mother in real life).

Wes Farrell, who was ironically also producer of The Cowsills, took the production role on all Partridge Family recordings and not only produced the music but wrote a lot of it himself and basically oversaw every single aspect of any recording that was released under The Partridge Family banner.

Now, the first time I became acquainted with The Partridge Family was when one of my other older brothers, I’m the youngest of five, and I were shopping with my mother in an L.S. Ayres department store, of all places.

L.S. Ayres had a small record section and my brother asked if he could get the 45 (with a picture sleeve I might add) of The Partridge Family’s first hit single ” I Think I Love You”.

Well my mother caved in and, just to keep me quite I suppose, bought me a copy as well. You see I wanted whatever my older brother wanted I guess as  I certainly had never heard of The Partridge Family.

This must have been in late 1970 as the song came out in the August of that year and was a number one million-seller by November.

The other early memory I have is being taken to nursery school around that time or even possibly in early 1971 and, wait for it, making the poor teachers at the school play my Partridge Family album (their first) that I had obviously been given.

Even as a kid I didn’t like nursery rhyme type children’s music so I’m sure I was a strange site; a four year old throwing a fit so he could listen to his Partridge Family album. Yikes!

Well, all these years later I STILL love the music of The Partridge Family. Yes, it was never cool (neither was I) and yes it is a bit MOR (middle of the road) and not edgy AT ALL.

BUT it’s also some damn fine pop music sung exceptionally well by David Cassidy who became one of the biggest, if not the biggest, teen idols of the 1970s.

A lot of The Partridge Family’s music was written by great Brill Building songwriters (some of whom also contributed to The Monkees music) like Gerry Goffin and Bobby Hart as well as some terrific contributions from newer songwriters like Tony Romeo (writer of “I Think I Love You”) and Terry Cashman and Tommy West.

I’ve never grown tried of the lush harmonies and catchy pop perfection that make up quite a lot of the music from The Partridge Family.

Yes, it could be formulaic at times but the best of it stands up as some truly wonderful examples of pop music from the 1970s.

Below are some of the vinyl, as well as a few older CDs I own thrown in for good measure, that I acquired this year in various flea markets, antique stores and Amazon.

I found three albums recently in pristine shape still in their shrink wrap their with hype stickers and price tags still on them. And as I’ve said before I LOVE old stickers on my albums lol.

One rare album (see below) which I never owned until this year is a double Lp set called “The World of the Partridge Family” which is one of the best sounding slabs of Partridge vinyl I’ve ever heard.

Partridge Family vinyl is hit or miss as some of the pressings of their albums had very noisy vinyl and but this set is a true gem and just sounds tremendous.

Also below is the rear of a UK pressing of the first Partridge Family Album, that features “I Think I Love You”, which also sounds a step above most Partridge albums in my collection.

Partridge Family albums aren’t that expensive and certainly are disdained by many but who cares? The fact that people get their knickers in a twist about the group makes no difference to me at all.

These recordings bring back sweet memories and fill me with a joy that comes from the undiluted and innocent joy of youth and that’s irreplaceable.

So all you haters, feast your eyes on some Partridge platters and “Come On, Get Happy”!!! 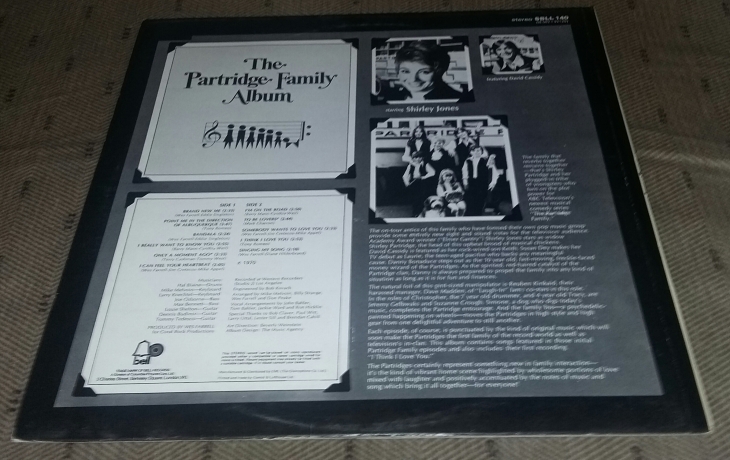