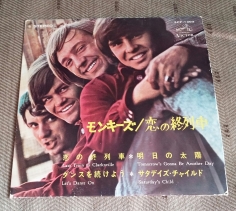 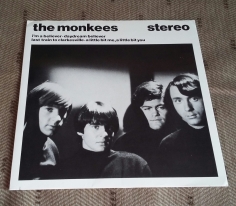 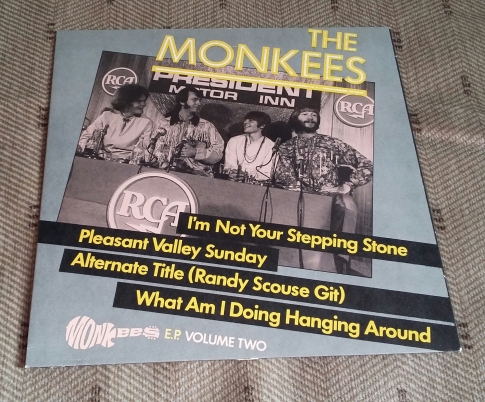 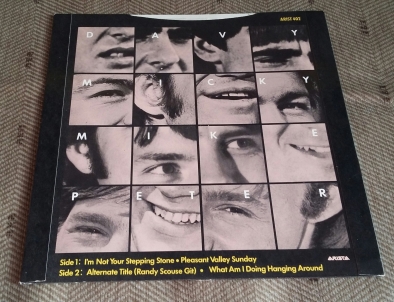 Welcome to the first day of March!

Not only does that mean that Spring is just around the corner but that the dreaded month of February, which I call the armpit month of the year, is finally OVER!

For you see February (at least in my part of the world) not only means snow, cold and the beginning of tax season but in the last few years it’s also taken on a much darker tone as it’s now the month in which two Monkees have died!

With last week’s sad news that Peter Tork succumbed to cancer and yesterday’s 7th anniversary of the passing of Davy Jones, February will now officially be known, to me anyway, as the worst month of the year!

Today I’m going to turn the way back machine and take a look at three fairly uncommon Monkees Extended Play releases from Japan and England.

(Extended Plays, for those who are too young to know, are 45’s that have four songs on them instead of two. Extended Plays are also known as E.P.s and were much more popular around the world at least for pop music and never really caught on in the U.S. market like they did in England and Japan.)

The first E.P. from my collection I’m featuring (see above), and my favorite, is a Japanese E.P. called “Last Train to Clarksville” which features that song along with “Tomorrow’s Gonna Be Another Day”, “Let’s Dance On” and “Saturday’s Child” all from The Monkees first album titled simply “The Monkees“.

Call  me strange, a lot of people do lol, but I love the miniature sleeve that features the artwork from The Monkees’ first album on the front and the songs and their accompanying lyrics on the back.

This E.P. actually plays at 33 and 1/3 but is the same size as a 45 and sounds pretty darn good! I must say the Japanese knew and know how to press records and this record is pretty quite and plays just great.

The other two E.P.s above both come from the U.K. and I believe, though don’t quote me as I my memory is getting faulty, came out I’d say around 1980 and 1981 or there about.

You don’t see these E.P.’s much these days if at all, here in the States anyway, but I remember mail ordering both of them in the early ’80’s. I also remember just being thrilled that any new Monkees product was being produced somewhere in the world because there was nothing, I mean NADA, being produced at that time in the U.S.

Both of these U.K. E.P’s also have those weird pressed labels on them instead of paper labels like U.S. 45’s so that was also an interesting thing I remember when they arrived in the mail.

I must say the U.K. E.P.’s don’t have the most original song selections but I love the covers and have always been a fan of E.P.s especially British ones because I just love the look of them and they take me back to the ’60’s era more so than even the regular 45’s.

From time to time when nostalgia comes a knockin’, which admittedly is more and more frequently, I pull these babies out and give them a spin. There’s no better feeling than dipping my toes back in time while looking at these groovy covers!

Anyway, here’s to Peter and Davy and here’s to the Monkees music!!! May it live long and prosper – oops wrong show.

Until next time be well and think Spring – it’s almost here!!!