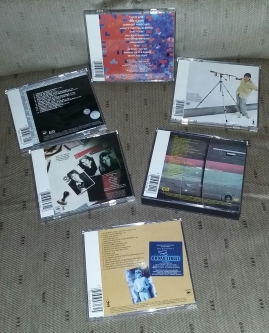 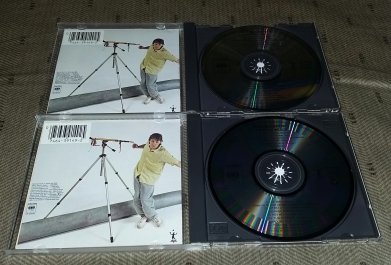 Welcome back my friends to the blog that never ends!

Tonight I thought it might be fun to take a look back. To readers of this blog that’s a shocker I know.

Anyway, with all the news lately about the impending death of CDs (and DVDs and Blu-Rays for that matter) and all the talk of how much money record and film companies are making from streaming, I wanted to go back and take a look at the very first CDs I ever purchased.

To do that I’ll have to turn the way back machine dial to January, 1986. I remember it well for you see it was in January of 1986 that I bought my very first CD player. It was a refurbished Magnavox CD player that I bought from the Maganvox employee store at a very good price.

(My dad had been a Magnavox employee and we could still get discounts there even though he had died seven years previously.)

Of course I had been drooling over CDs for over a couple of years but it wasn’t until 1986 that I could get one that was decent priced and boy do I remember being excited!

My older brother had bought a CD player in 1985 and I remember being amazed at how there were no cracks or pops in the music, you could program the songs and best of all they just sounded so nice.

Anyway, over the next few months I slowly acquired my first few CDs and all of them were by Paul McCartney. (I  know, another shocker lol).

I remember starting with the Paul McCartney CDs that were released on the Columbia label as by that time he had re-signed with Capitol Records and I knew those CDs wouldn’t stay on the shelves forever.

(Note: Paul McCartney was signed to the Columbia Records label only in North America from 1979 to 1984. In 1985 he returned to Capitol Records as did his catalog of music.)

The first three CDs that I bought were all from Musicland (remember that chain in malls across America?) and they were all in bubble packs hanging on the wall in the then small section of CDs. Those CDs included “Band on the Run”, “Venus and Mars” and “Wings Over America”.

Even then I knew that the “Wings Over America” CD wasn’t that common as I didn’t see it in any other store at the time. Because of its cost and the fact that it was released at the end of McCartney’s Columbia contract make it the rarest of the six Columbia McCartney CDs to find these days.

As time went on over a five week period I managed to buy all six of the Columbia Records McCartney CDs (And in those days that was quite a feat as CDs were really expensive!). For years these pressings were the only versions I owned on Compact Disc of these albums even after they were reissued in better sounding versions by other reissue labels.

To this day I think the best sounding digital versions of the “Tug of War” and “Pipes of Peace” albums are these original Columbia CDs but the others, while having been improved upon sound wise in later CD issue, are all nice sounding CDs which I still play every so often as they’re really easy on the ears and sound nice and warm and have all their dynamic range intact.

The Columbia McCartney CDs I have in my collection were manufactured in a mixture of locations – some were made in Japan and some were made in the U.S.A. Just last year though I stumbled on a U.S. pressing of the “Pipes of Peace” CD (see above) as the copy I bought in 1986 was made in Japan. That CD is the only Paul McCartney Columbia CD I own two copies of pressed from different countries.

As usual you can gander at the photos of my small Paul McCartney Columbia CD collection.

I hope you are sitting down somewhere about now listening to some of your favorite music. I am. Can you hear it?

“Sitting in the stand of the sports arena, waiting for the show to begin …