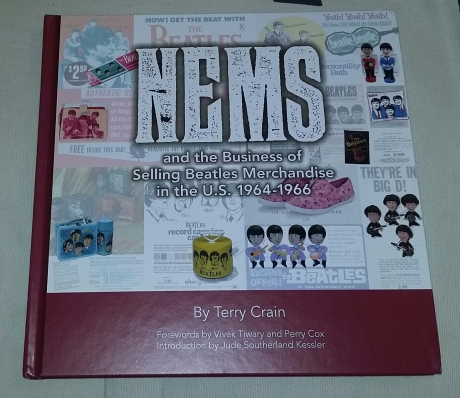 Every once in a while a new Beatles book comes along that just knocks my socks off, so to speak.

This happened to me just this past week when the book “NEMS and the Business of Selling Beatles Merchandise in the U.S. 1964-1966” By Terry Crain arrived at my door step last Friday from Amazon.

You see as a die-hard Beatles fan it’s getting tougher and tougher to find a book about the group that covers anything new or interesting that hasn’t been done to death or been done better in a previous book.

By now it seems as if every conceivable angle or story has been written about The Beatles be it their life, music or whatever that whomever decides to jump into the murky waters of publishing a Beatles book must really bring the goods.

Well my dear blog readers and fellow Beatles fans out there “NEMS and the Business of Selling Beatles Merchandise in the U.S. 1964-1966” really does deliver the goods – in every possible way!

(Note: Even before I opened the book I was impressed as even the shipping box the book came in was full of Beatles stickers – see above)

I knew that the book was being worked on as a few months ago the author had contacted me on Facebook about a flyer that I found last year in an antique store that highlighted some cool Beatles memorabilia from the 1960’s.

I posted a photo of the flyer on a Facebook Beatles group and Terry Crain asked if he could use it in a new book he was writing about U.S. Beatles memorabilia and of course he would credit me in the book as well.

I had never heard of Terry before and didn’t really know what kind of book he was going to write but since this Beatles flyer I found was so fun I thought it might be nice to share it with other Beatles fans.

I had never seen the flyer myself and possibly many others may have never seen it either so what better way to share it than in a nice book  about Beatles memorabilia.

Terry did use the photo of my flyer (see above) and boy am I glad he did! Terry’s book, I can honestly say, is one of the best designed and most entertaining Beatles books I’ve ever seen and believe me I own quite a few.

“NEMS and the Business of Selling Beatles Merchandise in the U.S. 1964-1966” is a feast for the eyes with page after page of wonderful photos of not only Beatles U.S. memorabilia but photos from the time as well.

The book is also well written and gives the reader a nice overview of how The Beatles’ manager Brain Epstein, through is company NEMS Enterprises Ltd., made the deals for the sale of Beatles U.S. merchandise.

The Beatles U.S. memorabilia is so iconic and so tied into Beatlemania of the early 1960’s that this book really is a wonderful window into that far away world and the prefect way to experience (or re-experience) it without having to have shelves full of Beatles memorabilia yourself.

Really if you’re a fan of The Beatles, were there at the time or just want a glimpse into Beatlemania in the United States from 1964 to 1966, “NEMS and the Business of Selling Beatles Merchandise in the U.S. 1964-1966” is a must read and something you’ll treasure for years to come as it’s a great book to read over and over again.

In the front of my book it said the book was limited to 1000 copies, or at least this hardback version, so if you’re at all interested in seeing it for yourself grab one quickly. I can’t recommend the book enough!

As I said I found my copy through Amazon but you can also buy it online through: https://www.fabgear.company/nems-enterprises-ltd

Pardon me while I pull out a mono copy of “Meet the Beatles” and peruse this book one more time. In this Internet, social media driven world it feels like the perfect time to step back into 1964.

As usual take a peek at some photos of the book above.

And until next time, be well!!!