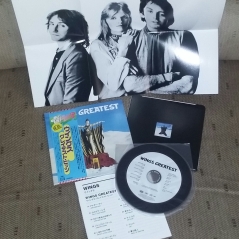 You say it’s your birthday indeed!

Today Paul McCartney turns 76 years old (unbelievable!) and with the imminent news/release of McCartney’s latest album hopefully dropping this week I thought it might be fun to look back at one of my all-time favorite solo McCartney albums “Wings Greatest”.

Even though “Wings Greatest” is a compilation album I think it contains some of McCartney’s most choice solo recordings and is one of the first McCartney solo albums I owned.

I had dabbled in a few of McCartney’s solo singles – “Uncle Albert/Admiral Halsey”, “My Love” and “Listen to What the Man Said” – but up until 1978 when “Wings Greatest” was released the only other McCartney solo albums I owned were “Ram” and “London Town”.

I was strictly hits oriented at the tender age of 12 and I remember receiving the “Wings Greatest” album for Christmas that year and playing it to death. I must have played that vinyl copy a dozen times in the first week I owned it!

So, above are photos of four different CD pressings of the album from my collection – the first Japanese CD issue, the first UK CD issue, the McCartney Collection issue also from the UK and the latest (and greatest I might add) CD issue, the SHM-CD Mini-Lp Japanese issue which just came out last month.

All four of them sound different as they all have different masterings.

The first Japanese CD issue of the album which was released at the end of the 1980s sounds pretty good but has a noticeable treble boost and is a bit hissy sounding. Not great but not bad either. Some of the songs sound superb while others are hit or miss.

While a bit hard to find these days at one time this Japanese issue was my preferred version of this album and was for awhile the coveted issue on compact disc.

The first UK issue of “Wings Greatest” also from the late 1980s actually sounds really nice and is one of the best sounding versions of this album on CD. I’d give the nod to the latest SHM-CD as it has a bit more fluid low end but this CD is no slouch in the sound department.

The McCartney Collection issue from the 1990s is okay but suffers from noise reduction which was prevalent at the time and while it’s not horrible sounding it’s a bit dead or flat sounding compared to the two best CD versions.

The creme of the crop version of “Wings Greatest” on compact disc by far is the superb SHM-CD which just came out this year.

Not only does it sound great – it’s part of the McCartney Archive Collection releases – but the packaging is terrific as well with the lovely reproduced mini-lp sleeve, poster and inner sleeve that mimic the original Japanese vinyl.

So sit back today and if you own a copy of “Wings Greatest” throw it on in celebration of its creator on his 76th birthday.

Happy Birthday Paul and I look forward to your latest album soon!!!

Cheers until next time!

One thought on “You Say It’s Your Birthday – “Wings Greatest” McCartney Birthday Salute!”