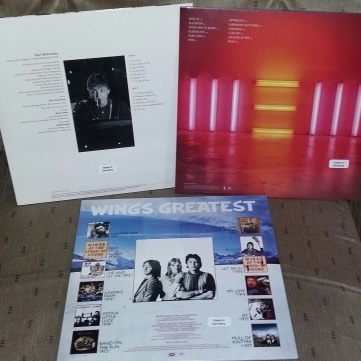 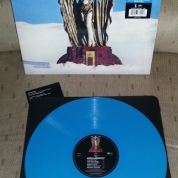 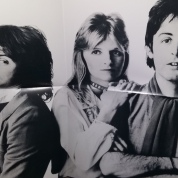 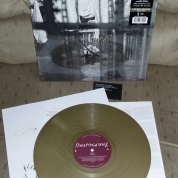 Well, here we are, another fine May evening; warm, sunny, green – basically a lovely day.

What makes this evening even better is the unexpected early arrival of some new vinyl. Better yet some new Paul McCartney vinyl! And colored vinyl to boot!!

You see my local record store just put out some tasty colored Paul McCartney vinyl albums that are due to be released tomorrow, May 18th – “Wings Greatest” (blue vinyl, with poster), “Chaos and Creation in the Backyard” (gold vinyl) and “New” (pink vinyl) – and of course I was there to scoop them up.

These new reissues are part of Capitol Records celebration of McCartney’s return to the label and a nice way to get McCartney product back on the shelves under the Capitol banner and also nice additions to the more in-depth Paul McCartney Archive Collection releases from the last ten years or so.

(Note: One more title, “Thrillington” (red and black vinyl), is due out tomorrow as well but alas I don’t have that one – yet.)

Last November eight other Paul McCartney albums were reissued on colored vinyl and I highlighted those on an earlier blog post, tonight you can feast your eyes on three of the latest releases (above).

Of these three new reissues, the “Wings Greatest” album holds by far the most sentimental place in my heart. I remember getting this album on vinyl in December 1978, when the album was first issued, and playing it to death.

I also hung the nifty poster of the then three Wings members on my wall and watched it grow tattered and torn over the years. (You can see the nicely reproduced version that’s included in this new issue which looks great – nicely done and thicker paper than the original too).

I must say this new “Wings Greatest” reissue sounds superb and as the back cover states was remastered at Abbey Road Studios. I’m sure this new mastering is part of the same mastering that’s been going on for McCartney’s Archive Collection but nevertheless the album sounds great.

I did need to clean it a bit as there were a few pops here and there but the bass on this new edition just sounds wonderful and much deeper and richer than my original vinyl issue from the 1970s.

The other two albums are of a much more recent McCartney vintage and are what I consider two of McCartney’s best later day albums and stand among my favorite work from his solo career.

These new vinyl additions also have the benefit of sounding better than their CD counterparts as these two albums on CD are mastered a bit hot and sound more compressed and these vinyl editions tone that down and make for a much more enjoyable listen.

I have these two albums on vinyl from their original releases as well as these sound pretty much the same – superb!

I will say the new “New” reissue is lacking the gatefold cover and booklet of the original vinyl release (too bad) but the vinyl is nice and quite and looks lovely in pink and is the best way to listen to this collection which is one of McCartney’s best which is saying a lot as he has released quite a few great albums.

The original “Chaos and Creation in the Backyard” vinyl release was also issued with a gatefold cover but since that issue has gotten to be expensive this new reissue is great as the vinyl sounds so good that the non-gatefold cover is no big deal (to me anyway).

If you’re looking to add some McCartney vinyl to your collection, these three albums are a must.

And if you’re just out for the best sound and could care less about spending a few more dollars for the colored vinyl, the regular black vinyl editions will work just fine.

Of course if you’re a nutty collector like me try and track down the colored vinyl issues – they’re just great. Lovely reproduced cover art and well-made vinyl in purdy colors – what’s not to love?!!

Until next time, be well and happy shopping! 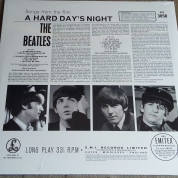