Today I’m highlighting a five LP set put out a couple of years ago by Friday Music called “The Monkees in Mono” by none other than, wait for it, The Monkees!

I thought I would not only discuss some of my favorite mono mixes from the 1960s which are on this set but I also wanted to begin to highlight some of the truly wonderful vinyl box sets that I’ve collected recently which have become all the rage in collectors circles over the past few years.

The advent of Record Store Day has brought this set, along with many other equally terrific collections, to the greedy little hands of music collectors around the world and have made it possible for collectors and newbies alike to experience these albums the way they were originally released in a mixing style that’s long gone but not forgotten.

Now since these five Monkees albums sold in the millions in the 1960s and since you can find pressings of at least the first three albums in this set in mono quite easily, what you may ask is the point of this set?

The point, besides making money of course, is that most original Monkees records were bought by kids and teens and were played to death by their original owners and beat to a pulp or worse over time.

‘The Monkees in Mono” is a nice way to buy clean, crisp remastered versions of these albums and to also get the EXTREMELY rare mono mix of The Monkees fifth album “The Birds, The Bees and The Monkees” which has become quite an expensive collectors item as it isn’t easy to find.

Mono mixes were almost phased out by the time “The Birds, The Bees and The Monkees” was released in the spring of 1968 and this album is even harder to find then the Simon and Garfunkel mono pressing of “Bookends” which was released at roughly the same time.

Friday Music did a nice job of transferring the mono mixes (most likely digital transfers from Rhino Records mono CD versions) on these albums and this set sounds really nice!

The stereo mixes of these albums sound fine but again, the way to hear these records is in mono. The Monkees’ second album “More of the Monkees” especially holds together much better and has much more impact in mono than its stereo counterpart.

Songs like “Last Train to Clarksville”, “She”, “(I’m Not Your) Steppin’ Stone” (longer in mono), “You Told Me”, “You Just May Be the One”, “Pleasant Valley Sunday” (different vocal parts and much more psychedelic ending than the stereo), “Auntie’s Municipal Court” (way different feel and much spookier in mono) and “Writing Wrongs” all have a bite and punch that’s missing from their stereo counterparts.

From different timings to the way the instruments are placed in the mix to different vocals to different effects; these mono versions let the listener experience these albums in a different (and I say much more satisfying) way then hearing the stereo versions.

One note, the mono tapes of “The Birds, The Bees and The Monkees” have been missing for years and this mono version was taken partially from tape (“Valleri”, “Tapioca Tundra” and “Daydream Believer”) while the rest came from a vinyl copy of the original mono album.

“The Monkees in Mono” comes in an attractive, sturdy box, has nice cover reproductions and contains some of the best pop/rock albums released in the 60s, what more could you want lol?

A tad bit pricey perhaps but nonetheless this a really wonderful set which you can still purchase on Amazon or through your local record store, if you still have one that it is.

Check out some photos below and “Take a giant step, outside your mind” … 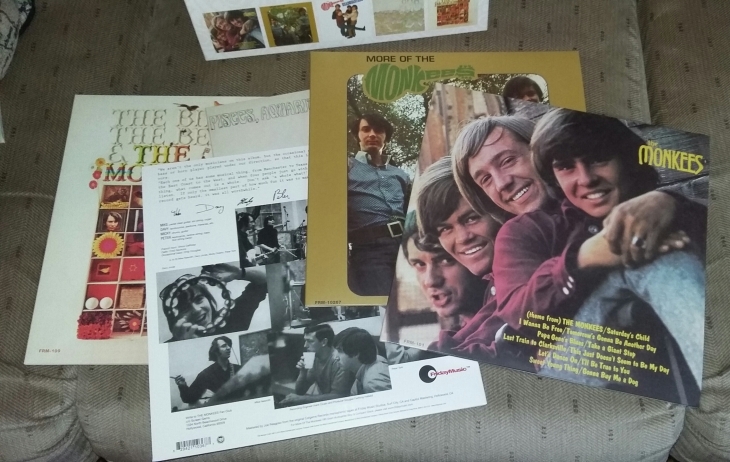