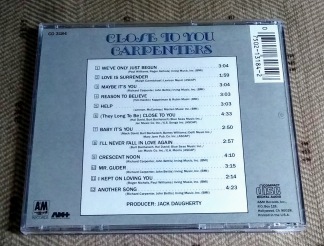 Another anniversary? Well, I guess so, yes.

I’ve been trying to stop the urge to post anniversary blogs as most of my favorite albums are getting quite old but since an album by one of my most cherished groups hits 50 years old today, what the heck why not?

Exactly 50 years ago an album called “Close to You” was first issued by the pop/rock brother and sister duo The Carpenters. In celebration of this occasion I thought I’d post a couple of versions of this album I happen to own on compact disc. I also own it on vinyl but that’s another story for another day.

Before we take a look at the different CD versions I own let me say a little bit about The Carpenters.

As a child, and I mean a child, four and five years old in fact, my mother for some reason ended up buying me two 45’s which I own to this day – “(They Long to Be) Close to You” and “Hurting Each Other” – both by The Carpenters.

Who knows why I liked them so much at that age. I’ve always been attracted to melancholy in songs so maybe even at that young age they appealed to me but whatever the case I owned and played these two songs to death.

In fact I still own the tattered picture sleeve for “Hurting Each Other” in which I proceeded to color in each of tiny photos of The Carpenters in one side of the sleeve. My five-year-old version of  liner notes I guess lol.

Anyway, since that tender age many years later I graduated from 45’s to albums of  The Carpenters greatest hits. It’s really only been in the last fifteen years or so that I actively bought their full albums and the “Close to You” album is now one of my favorites.

Besides the title song the album contains a slew of terrific songs – the classic No. 1 hit “We’ve Only Just Begun”, “Maybe it’s You”, a really lovely slowed down version of The Beatles’ “Help”, “Baby It’s You” and one of my all-time favorites “Crescent Noon”.

Not everything on the album is great but this album is mostly a terrific listen and along with two other early Carpenters albums (“Carpenters” and “A Song for You”) it’s a slice of pure sweet ’70’s pop filled with the achingly tender and smooth vocals by the late Karen Carpenter.

It’s so odd to think that here the Carpenters music has lasted over 50 years while Karen Carpenter herself only lived to be 32 years old.

BUT since this a celebration of music I don’t want to go down a road of sadness. I’m just glad this music has managed to survive all these years and in my opinion it’s also managed to grow even more appealing and wistful with each passing year.

Above you can see the first CD issue of the album on A&M Records as well as a later issue of the album that came in a box set along with “Carpenters” and “A Song for You”. This later box set features the true original album mixes and were released in the late 1990s as part of The Carpenters Remastered Classics series.

The reason that the 1990’s CD’s are special is that most of the original Carpenters CD feature newly remixed tracks for some of the songs by Richard Carpenter, the lone surviving Carpenter who not only played piano but did most of the production and arranging for the duo.

For me the 1990’s Remastered CD’s are a blessing as even though I do enjoy many of Richard Carpenter’s remixes I also want the original album mixes available as well as that’s the sound I remember from the the 1970’s.

(Note: Actually the first CD issue of “Close to You” may not even have any remixes on it – I’m not sure. Later albums are filled with remixes especially of the hit singles but I think for the most part the first issue of this album contains the original mixes.)

Whatever the case may be, whichever version of the “Close to You” album you get your hands on is worth it. Karen Carpenter’s silky voice should be remembered and celebrated and hopefully will be for many years to come by future generations.

And for those of you out there who don’t like or get The Carpenters or think they’re uncool or whatever … I don’t care. I’ve always loved them and I always will.

Above you can see my mini pile of Carpenters CDs. Each and every one a gem.

That’s all for now. Just a quick hello and shout out to a 50-year-old friend.

Be well and stay safe … until next time.