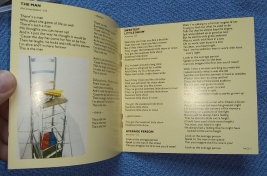 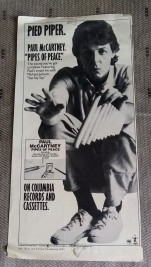 October 1983. I know it was a long time ago but do any of you out there who were alive at the time remember what you were doing?

I for one was in my senior year in high school and as was typical of me then, and now quite frankly, I was eagerly awaiting the release of a brand new Paul McCartney album which was to be released on October 17, 1983.

That album, called “Pipes of Peace”, was the sequel to his very successful and acclaimed album “Tug of War” from 1982 and I was chomping at the bit to hear it.

I already loved and owned the first single from the album, “Say Say Say” the duet with Micheal Jackson, and knew that the upcoming “Pipes of Peace” was pretty much recorded at the same sessions as “Tug of War” and was also produced by George Martin.

Enough said, I’m in, take my money I remember feeling as the release date approached. Of course that’s usually my attitude toward new McCartney releases it was just more heightened at that time and that age.

Now I also distinctly remember being quite surprised by both the critical and commercial  reception that greeted “Pipes of Peace” which was not what  I was expecting and seemed to come out of nowhere.

Don’t get me wrong I loved the album, still do in fact, but the critics were less than kind to the album in many of the reviews that I read and I was quite shocked when the album stalled at number 15 on the Billboard Hot 200 albums after entering at 16 the week before – truly weird.

The single “Say Say Say” was an out and out smash hitting number one for several weeks so it was truly strange to see the album kind of not tank really but not do as well as I had expected.

To this day a lot of McCartney fans are lukewarm at best to this album but from day one I’ve always loved it. Granted the “Tug of War” album is a much stronger collection of songs but I’ve always enjoyed this lighter sounding sequel and it never fails to put me in a calmer peace of mind whenever I play it.

“Pipes of Peace” holds many happy memories for me and remains one of my my all-time favorite McCartney albums. In fact the title song as well as “Keep Under Cover”, “So Bad” and especially “Through Our Love” are songs I return to frequently and have enjoyed quite often throughout the years.

I must say both CDs sound quite good but I may give the slight edge to the newer remaster as it has a bit more punch than the original. The original CD is definitely warmer and has great acoustics but sounds slightly softer and less detailed than the remaster.

Both are quite good and every time I play the Made in Japan original UK CD it really takes me back in time as that’s how I remember the album sounding in 1983.

Can it really be over thirty-seven years ago, yikes!

As usual take a gander above at the two CD issues as well as a bonus ad I cut out from some magazine at the time (Rolling Stone magazine most likely) and if you’ve never heard the “Pipes of Peace” album you should definitely check it out as it’s stood the test of time.

(Note: Just for grins I also added a couple of photos of the first US CD issue of the album on Columbia Records – one made in Japan and one made in the US. Both of these CDs sound pretty much the same as the UK first issue but may sound even a tad bit better.)

Anyway, enjoy this quick peak at Paul McCartney’s “Pipes of Peace” and until next time be well and more of my musings coming soon … 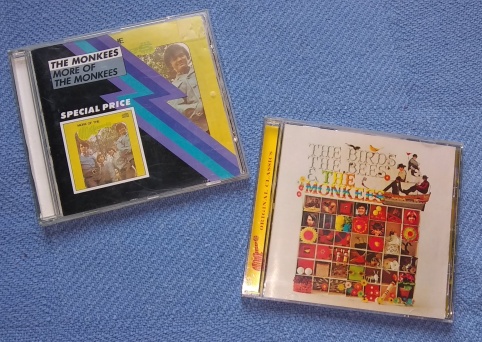 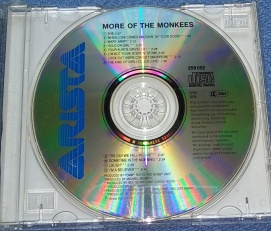 Well, it’s been a bit since I stepped into the virtual word of blogs but as we near the end of very hot and steamy July (in these parts anyway) I thought it might be a good time to drop back in and say hello.

The best way to survive the heat , for me at least, is to try and find a cool place and listen to some music. And what better music to listen to then some older music, some 1960’s music.

Fans of classic ’60’s pop/rock are in luck as today I have The Monkees on my mind so I thought it might be fun to take a look at some variations of Monkees CDs that have managed to make their way into my collection.

The two CDs I’m highlighting today are a 1987 German import CD of the group’s classic second album “More of the Monkees” as well as a copy of the 1994 Rhino Records CD version of their fifth long player “The Birds, The Bees & The Monkees” that happens to be a BMG Record Club version.

First up, “More of the Monkees”:

I found this groovy imported version of the 1987 Arista Records CD sometime last year and was immediately struck by the unusual cover. Let me back-track a bit though for a second.

In 1987 Arista Records, who at that time owned The Monkees music catalog, had decided to release some of The Monkees albums on CD for the first time after having licensing The Monkees catalog to Rhino Records who had reissued the group’s catalog very successfully on vinyl in 1985 and 1986.

The Arista version of “More of the Monkees” holds a special place for Monkees collector’s as several songs on this CD were remixed from the multi-track masters thus creating unique versions of some of the songs from this album.

This Arista CD is the only place to find nifty remixes of the following songs: “She”, “Mary, Mary”, “Hold on Girl”, “Look Out (Here Comes Tomorrow)”, “The Kind of Girl I  Could Love”, “The Day We Fall in Love” and “Sometime on the Morning”.

Many of The Monkees original master tapes were still MIA at the time so Arista remixed these songs to give the CD version of the album a sonic boost.

In 1994 when Rhino Records took control of the group’s catalog these remixes were replaced by the original mixes thus this Arista CD is a must have for fans of the group as these remixes sound really nice and have various length and vocal differences that are fun to hear.

As I said earlier the truly unique thing about this German version of the Arista CD is the cover with the special price banner that wraps around the CD booklet. This CD was available in the States but lacked this groovy wrap around.

Small difference I know but I’ve never seen this CD version before so I thought it might be fun to share it here.

Next up is “The Birds, The Bees & The Monkees”:

In 1994 after Rhino Records won control of The Monkees catalog they began reissuing all of their albums on CD along with some choice bonus tracks.

This CD issue of the album included some terrific outtakes including the superb early version of “The Girl I Left Behind Me” (one of my favorite all-time Monkees alternate takes) as well as shirt and goofy Peter Tork spoken ditty “Alvin” and the notorious “Lady’s Baby”  also by Peter Tork which was worked on so much that Tork spent a fortune recording it only to have it rescinded to the vault.

In 2010 this terrific 1994 CD was expanded to a superb deluxe 3 CD set by Rhino Records with a treasure trove of previously unreleased gems from the 1967/68 sessions for the album.

Truth be told though that as time goes by I find that I prefer the 1994/95 mastering for the original Monkees albums on these first Rhino Records issued CDs. They’re easier on the ears and these CDs also contain unique mixes of some of the bonus tracks that were replaced by other mixes on subsequent reissues.

The only unique thing about the CD version “The Birds, The Bees & The Monkees” here today is that it’s a copy form the BMG Music Club which I happened to find in the used bin sometime last year.

All of my copies of the 1994/95 Rhino CDs were bought in stores when they originally came out so I had never run across a BMG copy before thus it landed here lol (see photos above).

For anyone new to Monkees collecting their is something unique mix wise in almost every CD version of their albums that were released on both Arista and Rhino Records so it’s worth the time trying to track them down if you can and have the interest.

As usual you can take a gander at these CDs above. I think I’m going to take some time in front of a fan and a stereo ad give these bad boys a spin.

That’s all for now! Until next time be safe and well and enjoy your late summer.