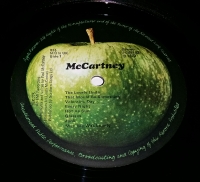 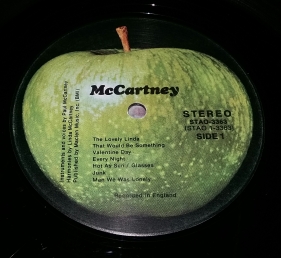 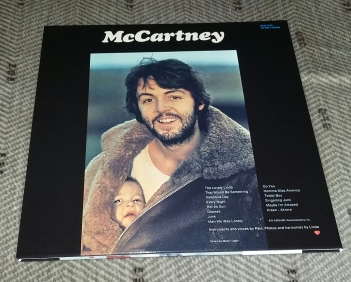 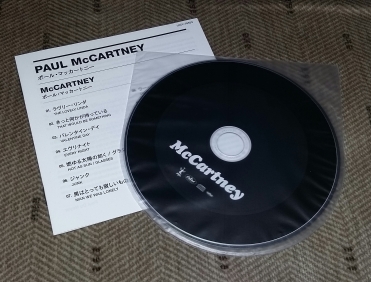 On the surface that sounds pretty ordinary but stepping back into the era the “McCartney” album heralded The Beatles break-up as press copies of the album featured an interview with McCartney in which he categorically stated he had left The Beatles and had no plans to return.

In truth John Lennon had left The Beatles first that previous fall but McCartney was the first to announce to the press the group was over thus the “McCartney” album signals the true beginning of the solo Beatles era.

At the time of the album’s release it was pretty much slagged as inferior work compared to McCartney’s Beatle days. Other than the truly superb song “Maybe I’m Amazed” which was universally praised the album was met with a critical ho-hum and seen as a step down.

Looking through the lenses of time it’s easy to see why expectations were high for this album. It had come out on the heels of The Beatles last recorded work together, the slickly produced “Abbey Road”.

“Abbey Road” contained the Side 2 long medley which was a McCartney brainchild and seen by many as the group’s high water mark as a recording act.

The “McCartney” album on the other hand was practically a homemade affair with McCartney indeed recording most of the record at home on a 4-track recorder and playing all the instruments himself with only bit of vocal assistance from Linda as the only other contribution from anyone other than McCartney himself.

The album was a low-key celebration of home and family and feels like a warm blanket on a cold night as it’s very soothing and mellow for the most part – something that I think is it’s strong point.

While certainly not on a production level with The Beatles last few albums hindsight reveals that the “McCartney” album is actually one dame fine record and one of my all-time favorite works by McCartney.

I came to the album long after all the furor of The Beatles break-up had settled and to me the basic nature of the “McCartney” album has always appealed to me.

I love the raw sound of the record and some of the songs have remained favorites especially “Maybe I’m Amazed”, “Every Night”, “Junk” (a Beatles cast-off), “Teddy Boy” (another Beatles cast-off) and “Oo You”.

The album is melodic, acoustic, atmospheric and filled with nice rock guitar licks throughout. There’s just something about the basic raw nature of the album that’s appeals to me and I’ve never grown tired of the album since I first discovered in 1978.

Today I thought I’d post some of my favorite vinyl and CD copies of the album that  I’ve acquired over the years.

The cream of the crop sound wise I have to say is the original UK first vinyl pressing of the album (see above) as it just has a presence to the bass as well as the vocals that other copies seem to lack.

Having said that I don’t actually think the other vinyl copies are that far behind mind you. In fact all of my vinyl copies of “McCartney” sound quite good but the first UK is the best.

I just recently found a well-loved Canadian first vinyl issue (pressed in the States it seems) and even though its a bit crackly in spots it sounds just great.

I’d also have to say that the Columbia pressed copy I own also sounds damn fine and is actually just a step below the UK original – it sounds that good.

I also have the original UK and Japanese CD pressings which also sound terrific but I think my favorite CD pressing is the recently released SHM-CD of the McCartney Archive version which has a really nice oomph to the bass and has more muscle to the sound compared to the first CD issues.

As usual feast your eyes on some slabs of the great “McCartney” album above.

Until next time Happy 49th to the “McCartney” album and if you’ve never heard it – you must! It will sound good no matter what sound medium you try but of course there’s nothing like placing the needle down on a vintage vinyl copy!