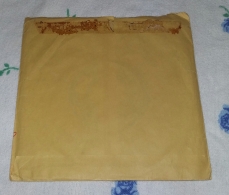 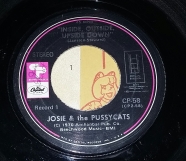 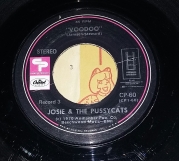 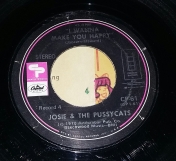 Yes the sun is finally out and while it’s not summer it’s finally, actually Spring!

To celebrate, I want to share some results of an early Spring cleaning I did this week. Of course most normal people don’t find old records hidden in the closet while doing Spring cleaning but as is the norm for me I did!

Tucked at the back of a dusty basement closet I found an old, long forgotten box that held a ton of old 45’s that I hadn’t thought about in almost 40 years.

Among the pile of old superhero storybooks, old Scholastic books with records and a odd Booby Sherman record or two, I found four particular 45’s that REALLY took me back in time to some early memories.

You see in 1970 at the tender age of four my mother ordered these four records for me from a box of Kellogg’s cereal. Yes, you heard right a box of cereal.

Not that I remember every detail of the show clearly of course – it was 49 years ago after all – but I do remember watching “Josie and the Pussycats” on Saturday mornings along side the then new cartoon “Scooby-Doo, Where Are You!”.

Both of these shows featured pop music and both shows also had records of those songs for sale which were offered on various Kellogg’s cereal boxes.

I don’t know why I never got the Scooby-Doo discs but I do remember getting these four “Josie and the Pussycats” records and playing them to death – or so I thought. I actually cleaned all four of these records and they still are surprisingly very playable. They actually sound pretty darn good in fact.

I hadn’t heard these tunes in well over 35 years but I was taken back by A) the fact that I remembered most of them and B) they weren’t half bad actually. Tuneful bubblegum pop with a hint of soul and sung and produced very well.

Now of course these aren’t tunes that evoke anything really “heavy”, to quote the times, but they are fun and tuneful and much like The Archies, another cartoon that spawned massively successful pop records, these songs are a lot of fun and do what good pop records do – they stick in your head like glue!

Trivia time-  did you know that one of the voices on these records belongs to none other than future “Charlie’s Angel” Cheryl Ladd then known as Cherie Moor?

There must be a cult following for these songs and the show because Rhino Records released a limited CD in 2001 called “Josie and the Pussycats – Stop, Look and Listen: The Capitol Recordings” that featured these songs and more through their Rhino Handmade Website.

Trivia bit number two – did you know that Bobby Hart (Monkees songwriter and producer) wrote some of these songs along with Danny Janssen? The pair also wrote some songs for The Partridge Family around that time as well.

Whatever the case, these 45’s were a blast to find again and fun to give a listen to after all these years. I’m truly surprised that they sounded as good as they did but I guess at even four years old I never totally trashed my records.

As usual take a peek at these records above and maybe it will jog some long lost Saturday morning memories  for you too.

Until next time, be well and stay groovy!