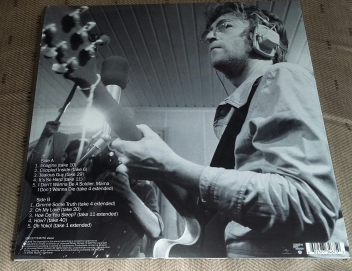 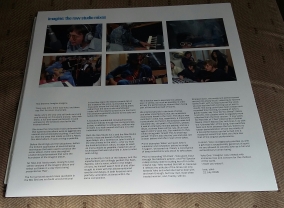 Well, well Record Store Day is once again upon us.

I just got back this morning from a quick trip to my local record store to report on a couple of fun finds I bought today that I think are really nice.

The only two Lps I had any interest in buying were still in the bins so I thought I’d share a few thoughts and pictures; one is by John Lennon and the other is by Elton John.

“Imagine: Raw Studio Mixes” features the complete Lennon album “Imagine” from 1971 in raw mixes of the album takes that don’t contain sweetening or post production and are just as the title says with Lennon and his band raw in the studio.

I did a review a few months ago of the CD box in which these were taken from (“Imagine: The Ultimate Collection”) but I will say it again here, I love these raw takes and love the feeling of being live in the studio with Lennon while he’s making this classic record.

If you bought the CD set than this Lp is probably not going to be of huge interest but the pressing is superb and sounds great. I like the album standing as a complete alternate look at the “Imagine” album in raw form and is well-worth owning.

I think the blu-ray disc with these same raw mixes (in the CD box mentioned above) may sound the best but this new vinyl issue sounds very, very good and is this is a great pressing with virtually no pops or clicks at least on my copy.

If you didn’t spring for the box and love Lennon or the “Imagine” album than this new RSD release will be a pleasant treat.

(Note: For the collectors out there there is a nice poster in the Lp as well though I must admit they could have chosen a better album cover – oh well overall very nicely done.)

Second up is the superb “Elton John Live From Moscow” 2 Lp set.

This live album from 1979 features just John and percussionist Ray Cooper playing  a great set with stripped down versions of Elton classics such as “Daniel” and “Rocket Man” as well as groovy deep cuts like “Better Off Dead” and “Tonight” – two of my favorite Elton John songs.

I saw Elton John live a few years ago locally in a concert with just him on the piano with no backing band and like this 1979 performance this is the type of show John excels at and this recording proves it.

The pressing is again nice and quiet and the concert sounds lovely. It was mastered by Bob Ludwig and will get many repeat plays as the few tracks  I’ve sampled so far are fantastic. Well worth the releasing and hopefully this will get a wider release on CD though these days one never knows.

Plus the Elton disc is pressed on cool looking clear vinyl which is another added attraction for collectors.

Both of these albums are limited pressings for independent record stores for Record Store Day and both are really well done. All you vinyl hounds out there will probably be happy with these releases though I’m sure your wallet won’t – that’s nothing new for Record Store day though.

I will say the single Lp Lennon disc which was the same price as the 2 Lp Elton John disc was a bit overpriced but still well done and sounds lovely.

I’m glad that record stores are being highlighted so as long as it’s easy to get in like it was today at my store and the stock is good than Record Store Day is a fun experience.

Be well and go home play some vinyl records today!!!