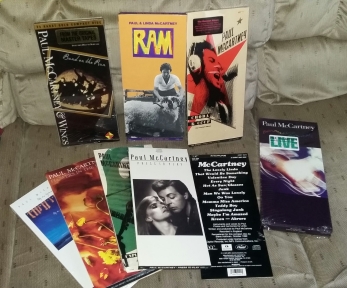 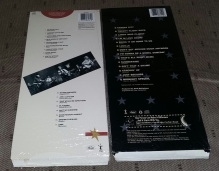 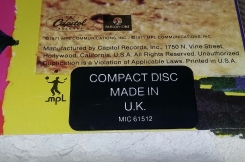 Well, since it’s been a long and somewhat irritating day I thought it might be fun to turn the way back machine, yet again, to what seemed like a simpler time.

Tonight I’m going to take a trip back to the late 80’s and early ’90’s, the dawn of the CD age and the digital era.

Hands up if anyone remembers the ’80’s? Good.

Now hands up if anyone remembers CD longboxes? Anyone? Bueller? Bueller?

Believe it or not at one time, because CD’s were considered hot items to steal, retailers wanted some kind of special package to be able to display and store sealed CD’s.

Plus they were full of colorful graphics and hype stickers and made it much more enticing to browse the CD section as the longboxes mimicked the Lp buying experience to a certain degree.

In one of my first blog posts here I did a quick overview of some of the CD longboxes in my collection but tonight I thought it might be fun to take an even closer look, this time focusing only on Paul McCartney longboxes.

(Note: yes I am somewhat of a pack rat but I consider these to be the CD era’s version of the picture sleeve and most of them are really fun and attractive to look at).

Some of my favorite Paul McCartney albums are present – “McCartney”, “Ram” and “Band on the Run” – and the last two I mentioned are even rarer than the others as the DCC CDs were pressed in limited quantities and were sold in selected stores as they were fairly expensive.

As you can see most of the McCartney boxes are pretty much variations of the original vinyl cover art but they’re really fun to look up stacked up along side of each other, at least to me anyway.

Since longboxes were only around for a few years and most (sane) people threw them out it’s fun to be able to see some of them and it definitely takes me back a few years which was just what I needed tonight.

As usual feast your eyes above and enjoy some of the colorful Macca cardboard that I have stored all these years for occasions just like this.

Until next time, Ram On!