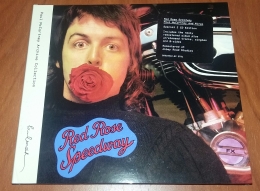 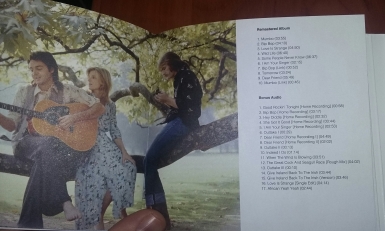 A few days late but since it’s still early January and this is my first blog post of 2019 it just feels right.

Anyway, as you know if you’ve read this blog recently two prime Paul McCartney and Wings albums from the 1970’s were released early last month and the reverberations of those terrific releases are still being felt – in these parts anyway.

I posted two reviews of the Super Deluxe sets of Paul McCartney and Wings “Wild Life” and “Red Rose Speedway” and for my first blog post of 2019 I’m taking a look at their 2 CD counterparts.

As much as  I love the two Super Deluxe sets I reviewed a few weeks ago, I’m still playing them and soaking in the video content, the 2 CD versions of these albums are also quite well done and for the average McCartney fan (translation the non-obsessed fan) these smaller sets are more than enough to enjoy.

For one thing they’re MUCH cheaper than their Super Deluxe brothers and while they lack the video content (which in the case of “Red Rose Speedway” is a true loss) they contain most of the prime outtakes, demos and single material from these albums and for those who just want the music these are really quite nice and well done.

While the missing tracks from the “Red Rose Speedway” Super Deluxe set like the studio versions of “The Mess” and “1882” are certainly missed they aren’t crucial as their live counterparts ARE on the 2 CD set and sound great.

The only missing audio from the “Wild Life” Super Deluxe set, the rough mixes of the entire album, while critical for super fans probably aren’t different enough for the average fan so I’m sure the 2 CD set will be more than enough as the video content isn’t quite as strong as the “Red Rose Speedway” set.

And of course for the super fans out there who want slightly better sound but not the Super Deluxe set there’s the 2 CD SHM-CD Japanese sets of both albums which might be the way to go if you’re nutty  (as they’re more expensive than the U.S sets) but not nutty enough to fork over for the Super Deluxe sets.

The other thing I wanted to highlight today is the 20 song “Wings Over Europe” CD which came as a part of the uber Deluxe set that was only available from McCartney’s Website (a few did escape on Amazon but not many).

The set contains the following songs:

Now for ONCE I didn’t splurge on the uber Super Deluxe set, yes even I have my limits, but I did manage to get a listen to the entire CD and I must say it’s TERRIFIC! I  have a few of these songs on bootleg CDs which sound decent enough but even I was surprised at just how nice this CD sounds and how good the first incarnation of Wings sounded in a live setting.

I’m guessing there’s probably a few overdubs helping these performances along but whatever the case this CD sounds great and it’s a real shame it’s not more available to the general public.

Who knows that may change someday but until then you can find most or all of the songs on YouTube or other sources and this set of live performance is well worth checking out!

Until next time be well and may you have the best and the happiest 2019!!!