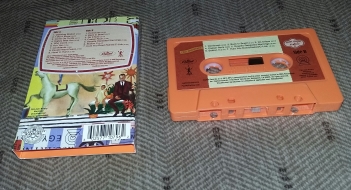 Well, apparently for a collector (and I know there are a few of you out there!) sometimes enough is just the beginning.

I think that’s it unless I forgot one  which I’m sure I did.

Anyway, that leads me to tonight’s post, ANOTHER “Egypt Station” variation – CASSETTE TAPE. Yes, you heard me right cassette tape!

The cassette version was offered as a PaulMcCartney.com exclusive way back in September but is only now hitting mailboxes as I’m sure they took their time manufacturing a small number of these gems for the die-hards.

It’s actually a pretty nice variation and though a bit on the cheap side – where’s the standard cassette case? –  it’s such a blast from the past that it was a no brainer to buy – for me anyway.

Just take a look at the nice cover art in cassette size! Alright it looks like one of those old cassette singles from back in the day but still fun. Plus the orange cassette color is a nice touch as well – please tell me it will be available in only one color!!!

McCartney’s Website also was (is?) selling a special “Egypt Station” lanyard/laminate that came with a download code for obtaining pre-sale McCartney concert tickets.

So since this blog celebrates all things physical media feast your eyes above at the groovy new cassette of “Egypt Station” and its lovely accompanying purple lanyard/laminate!

And while I haven’t played the cassette above – yet – it’s on my to-do list for the upcoming Christmas holidays. I intend to crank that baby up and see how it stacks against it vinyl and CD cousins.

Until then, see you next time and don’t forget to check your departure times at the Egypt Station! (sorry, couldn’t resist!)