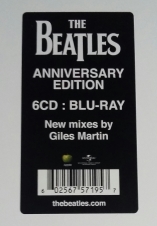 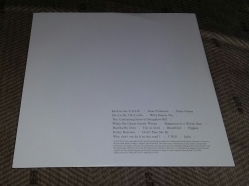 Well here we are, the week of Thanksgiving. It’s cold outside (at least where I am) and there is indeed a lot to be thankful for – at least in my world.

What music you ask?  Why The Beatles of course!

One of the things I’m most thankful for this month arrived on my doorstep ten days ago – “The BEATLES” – a Super Deluxe 6CD/Blu-Ray box set of The Beatles classic “White Album” which celebrates it’s 50th Anniversary this upcoming November 22.

This new set, much like last years terrific “Sgt. Peppers Lonely Hearts Club Band” Super Deluxe box set, is filled with superb music including the entire album remixed in stereo and 5.1 surround as well as a disc of 27 demos featuring The Beatles testing out most of the “White Album” acoustically and three discs of glorious (to me anyway) studio out-takes featuring the songs from the album in different stages of completion.

There’s been a lot already said online and in print about this new set already but I thought I’d toss my two cents in the ring because that’s what I do.

These past nine days have been filled with the sounds of 1968 Beatles and to me that’s an especially fitting treat. I’ve read that Giles Martin, son of famed Beatles producer George Martin, has said that the “White Album” sounds like it could have been recorded today and he’s right.

Timeless is a word I’ve used before to describe The Beatles music but this album certainly retains of its freshness and vitality especially with its nifty new remix.

So let’s talk about this new set!

First off though, the initial set I received in the mail had to be returned as it came with nasty dents on three of the corners which also tore the flimsy plastic case that holds the set.

I’ve read that Amazon has had several returns as the huge books that holds the discs weighs just over five pounds and is ripe for being dented as I’m sure these sets get tossed around in shipping.

Luckily Amazon’s return policy is quick and efficient and another set arrived at my door a couple of days later in near perfect shape.

Now on to the music.

First off the new stereo remix of the album done by Giles Martin is in my opinion for the most part is very successful. It really does make the music sound fresh and more clear, especially the vocals, while remaining fairly faithful to the feel of the original mixes from 1968.

Not every song works in this new remix but I really enjoy hearing the album in this new context. I’m never one to say that a remix would surpass the original mix but this mix sounds pretty darn good and is a nice alternative and is more enjoyable than last years “Sgt. Pepper” remix as it’s not quite as loud and adds a nice punch without being fatiguing.

I was particularly taken with the new mixes of “Dear Prudence”, “Cry Baby Cry”, “Savoy Truffle” and “Martha My Dear” – different yes, better than the originals no. But different is fun and overall the remix is satisfying. I like picking out bits of background vocals and instruments that were previously buried though the new double track echo on some songs sounds weird but overall this remix is nicely done.

(Note: I’m one of those old fogies that believes all the original mono and stereo mixes of any album should always be considered canon and THE mix to discover that particular album. However, I’m not against remixes as long as the original mixes are readily available.)

The third disc in this set contains 27 songs that The Beatles recorded on 4-track tape at George Harrison’s house which was located in Esher, a town in Surrey, England thus the title.

These acoustic workouts were put on tape so The Beatles could take stock of the tremendous volume of songs they wrote while spending time in India studying transcendental meditation in early 1968.

Most of these demos have been previously bootlegged but they have never sounded as good as they do on this new collection.

Truth be told I was only a lukewarm fan of the demos in their bootleg form as they sounded muddy and too out of sync.

These new versions of the demos were remixed from the original 4-track tape and sound tremendous! Some of the songs here – most notably Harrison’s “Not Guilty” and “Sour Mike Sea” and McCartney’s “Ob-La-Di, Ob-La-Da” – sound so damn good that if the studio versions had never been made these acoustic versions would be just fine all by themselves.

Now here’s where it gets really interesting – for me anyway! I LOVE studio out-takes and the bounty of three discs worth in this set doesn’t disappoint.

So may nice gems in this set it’s hard to pick favorites – but I’ll have a go anyway.

I especially love “Good Night (Unnumbered Rehearsal)” with the lovely background vocals featuring John, George and Paul, “Back In The U.S.S.R. (Take 5 Instrumental Backing Track)” which is so fun slowed down – makes it oddly more powerful, “While My Guitar Gently Weeps (Third Version Take 27)” – lovely though a bit sloppy but really nice guitar work, “Savoy Truffle (Instrumental Backing Track)” – really nice backing track and I’m loving the backing tracks more than  I thought I would, “Martha My Dear (Without Brass And Strings)” – love this song in any version and “I’m So Tired (Take 7)”.

Yes, I’d say you have to be a big Beatles fan to really get into the alternate takes but this is why I bought the Deluxe set in the first place.

None of these out-takes are dramatically different from their finished counterparts but that doesn’t mean they aren’t good. These three discs of out-takes are full of wonderful performances which deserve to be heard.

The Beatles were a tight unit and even the really loose takes are fun and great to hear.For those worried about out-takes not being enjoyable this new set should prove to be really illuminating. The Beatles were damn good and these out-takes prove that even the unpolished takes can be gems and are an entertaining listen.

This disc tuned out to be my second favorite part (or fourth part) after the out-take discs! I LOVE the Hi-Res stereo version of the album here as it uses the non-compressed master which sounds so much better than the CD counterpart! I wish they had done that with the “Sgt. Pepper” set from last year but at least they’re improving.

The uncompressed sound of the Blu-Ray is a bit easier on the ears and sounds great through my surround set-up. Unfortunately the indexing is a bit off as if you try to select a song from the menu it starts a few seconds late but that’s a minor quibble for me.

The Blu-Ray disc also contains a 5.1 mix which from the little I’ve sampled is really fun. I’ll have to really give this more time in the next few weeks as I don’t want to burn out on the songs but what I sampled sounds great.

You also get the 1968 mono mix of the album which is one my my favorite ways to hear this album. It seems that the mono is a straight transfer as it sounds like it wasn’t mastered at all and is lower in volume than I was expecting but nice all the same.

I’d say I prefer the 2009 mono CD version of the album as it sounds a bit more lively but this version is so nice to have. I just wish it would have been put on CD but it’s better to have it than not.

All in all this Blu-Ray is superb and my preferred way to hear the new remix of the album as it’s less compressed (though really the CD isn’t bad by any means) and sounds a bit warmer.

The last piece of the puzzle for this terrific set is the massive hardback book that holds the discs as well as lovely reproductions of the original photos and poster that came with the vinyl album.

I have to say this book, though quite heavy which probably is the cause for damage in shipping, is so well done. It’s full of great photos, nice information about all the tracks contained in the set and is the perfect thing to browse as you sit back and take in this bounty of wonderful Beatles music circa 1968.

I enjoyed the book that came with last years “Sgt. Pepper” set but I think this one is better. I’ve really enjoyed pouring over the book as I listen to all the variations of the songs on the album.

This new Super Deluxe has surpassed all of my expectations and is such a great thing for any Beatles fan! It is a bit on the pricey side so if you’re on more of a budget the 3 CD version with just the remixed album and Esher demos may be a better buy.

You can also thankfully stream all of the content of this wonderful set online as well but since this blog (and I!) are hopeless stuck in the physical world than of course I’d say splurge on the Super Deluxe box if you can.

The book and discs are a lovely site and so well done that this set makes the perfect gift for yourself or someone else.

It really hits all the right notes and is pretty much a crash course on “The BEATLES” and a really nice way to spend a few hours stepping back in time with The Beatles in the recording studio.

As usual check above to see some groovy photos of the set I bought.

Until next time be well and Happy Thanksgiving! (for those in the U.S.!)