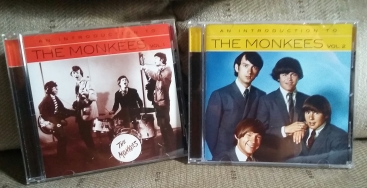 Welcome to Friday – a cool October Friday at that!

Today as I was browsing through a local Walmart store, something I do very infrequently, I happened upon a bin of cheap CDs and lo and behold I spotted a newer compilation CD I knew had been released but had never seen: “An Introduction to The Monkees”!

And of course since the CD in question was only $5 and I am a sucker for all things Monkee I bought it.

Now I need another Monkees CD like I need a hole in the head but this introduction CD, while bare bones, sounds really nice and has a really groovy cover photo. (Note: Not much of a rationalization I know but it works for me!).

I call this CD an ABC CD because its a basic introduction to The Monkees music, thus an ABC experience, or an “Already Been Chewed” type CD as these songs have been reissued many, many times over the years and most hardcore Monkees fans will just shrug when they see them.

In these dying days of the CD medium these types of hit compilation albums are perfect for stores like Walmart and other supermarket stores that cater to the casual shopper looking for the familiar and inexpensive.

I, of course, think these CDs do have a purpose and fill a need for the record company as I’m sure CDs sales now rely on these casual fans purchasing hits they remember.

This Monkees “Introduction to” CD is just one of a series of “Introduction” CDs put out by Rhino Records that highlights various artists greatest hits. Some of the other CDs in the series feature the likes of Hall & Oates, Gordon Lightfoot, The Drifters, Bad Co. and Andrew Gold.

These CDs on the whole are actually well done and a very inexpensive way to buy some great music that represents some popular older artists biggest hits.

Funnily enough, as I made my way to another local supermarket type store called Meijer (it’s grocery day), I also found the companion to this Vol. 1 CD called “An Introduction to The Monkees Vol. 2” again for $5!

Now this Vol. 2 edition has a really nice track selection featuring a few of my favorite Monkees album tracks including “You Told Me”. “Mary Mary” and “Look Out (Here Comes Tomorrow)” as well as the recent and superb “Me and Magdalena” from The Monkees 2016 album “Good Times!”.

These two CDs are basically updated versions of the older Artista “Monkees Greatest Hits” and “More Greatest Hits” albums that now include reunion material like the Top Twenty hit “That Was Then, This is Now” from 1986 as well as the previously mentioned “Me and Magdalena”.

While most fans of The Monkees will undoubtedly own all this material, for the uninitiated these two CDS are a great toe in the water moment for those who may only remember the group from their TV show and are just looking for the hits.

Unfortunately for those Monkee geeks out there these CDs don’t contain any unique mixes but do feature good mastering from mainly the most current remasters and do sound pretty nice. I didn’t find them shrill or overly loud but punchy and warm.

There are also, unfortunately, a couple of misidentified tracks on these sets. “Pleasant Valley Sunday” from Vol. 1 for example isn’t the mono single mix as marked it’s the stereo album version while “Goin’ Down” from Vol. 2 is an alternate mono mix and not the true single mix from the 45 as marked.

While those mistakes certainly won’t matter one bit to the audience that buys these CDs nonetheless it’s a bit mystifying how Rhino manages to keep making these small type of errors when all the information on these tracks is readily available but oh well.

These two CDs sound good and even after all this time it’s still nice to see new Monkees products on store shelves when CDs in general are getting harder and harder to find in any brick and mortar store.

So feast your eyes on some photos above of these two groovy CDs. Both have 2018 copyrights and seem to be readily available at stores like Walmart.

If you need a Monkees CD fix make sure you check threw those large bins of $5 CDs at Walmart I’m sure you’ll find one or both of these CDs swimming among the sea of bargain CDs.

Until next time, be well!!!