Well, it looks like Christmas came early – at least for me!

All of McCartney’s solo work new and old is back on Capitol Records after several years on the Concord record label thus the return of these albums to the Capitol fold and to my turntable.

Now, in the past I’ve not usually been a huge fan of colored vinyl but in my advancing years I’ve acquired an appreciation for all things vinyl and if it comes in purty colors all the better.

Earlier this week I did a blog post on a couple of the CD issues from this same series but  these new colored beauties are the main attraction for me of McCartney’s latest reissues so I thought I’d share a few thoughts and photos of them here so folks can see them.

As you can see from the photos, these new reissues have restored full album artwork without the distracting Archive Collection banner on the left hand side of the covers which is a welcomed treat.

The new covers look spectacular with sharp, clear artwork and all the goodies from the original issues of these albums plus a few new bonus treats.

The “Venus and Mars”album for example has all the posters and stickers that came with the album originally and the “McCartney”, “Ram” and “Wings At the Speed of Sound” albums have lyrics sheets added to these new issues which is a nice surprise.

These reissues have the same mastering as the Concord versions of this material (though no bonus tracks) and since I only had a couple of those issues on vinyl I’m excited to give these new pressings a spin and soak in some of McCartney’s best solo music on spanking new vinyl while I’m preparing for the holiday season.

One of the highlights of these vinyl issues is 1982’s”Tug of War” album which was totally remixed in 2015 for the Archive Collection and sounds much better on vinyl as the CD issue is a tad bit too loud but has been tamed on this vinyl version.

I will have to give all the others a spin soon but wanted to post some photos of the albums here first. I’ve included close-ups of all the new hype stickers – don’t you just love fresh new vinyl in the shrink wrap!

Enjoy and if you’re a McCartney fan and get the chance grab one of these beauties and give them a spin. The Archive remasters sound terrific and these new vinyl issues look superb.

To quote McCartney himself:

“Sitting In The Stand Of The Sports Arena
Waiting For The Show To Begin
Red Lights, Green Lights, Strawberry Wine,
A Good Friend Of Mine, Follows The Stars,
Venus And Mars
Are Alright Tonight.” 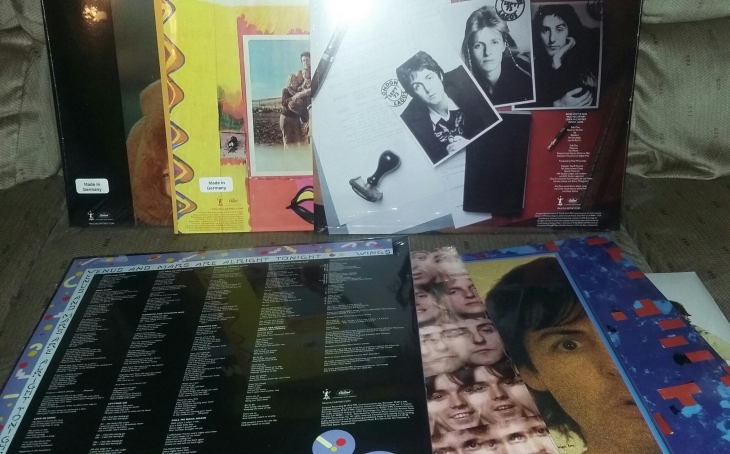