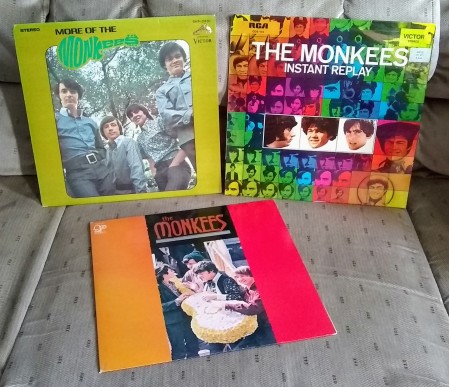 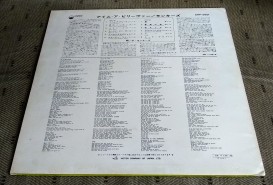 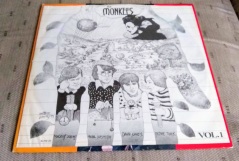 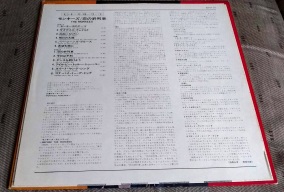 What a long strange trip it’s been so far. This year will certainly go down as one of the most unusual and scary years in recent memory.

It’s been a while since I’ve posted here but today I am back to share some recent (and somewhat obscure) vinyl pressings I’ve somehow managed to discover even in the midst of all this Covid madness and unrest in the world.

The one thing that represents normality to me is music so here are some groovy new Monkees vinyl pressings I’ve added to my stash.

Funny enough I rarely run across original Monkees pressings from overseas but in this last month I’ve come across two lovely Japanese vinyl pressings and one German pressing – “The Monkees” and “More of The Monkees” (both from Japan) and “Instant Replay” (Germany), all stereo.

Since Covid-19 has really limited my in person shopping all three of these gems were online purchases and all were had for very reasonable prices seeing as they are all in excellent shape and sound terrific.

The first album I stumbled upon was an original 1969 German pressing of  “Instant Replay”. The listing said it was a UK copy but I could tell from the photos it was from Germany and looked to be in great shape.

Sure enough when it arrived it was indeed a lovely German first issue that to my surprise played super quiet and just sounded amazing. I have other German pressings of Monkees albums that sound good but a bit muted but this beauty sounds every bit as good and dare I say it better than my original U.S. Colgems pressings.

Overseas pressings are usually taken from dubs of the U.S. masters thus they tend to sound a bit less lively than the original U.S pressings but that’s not the case here.

Original Colgems U.S pressings tend to be noisy and have some sibilant issues which make some songs sound screechy but this German copy is in nearly unplayed condition and everything sounded crisp and clean and very wide open.

Next up I stumbled upon two Japanese pressings from another online seller, one an original 1967 RCA pressing of “More of The Monkees” and the other and 1970’s pressing of “The Monkees”  on Bell Records.

My experience with Japanese pressings is mainly the 1980’s reissues on Arista Records which I gather didn’t come from the best sources as they don’t sound great. Not bad but not great.

I was really curious to see how these earlier pressings sounded and to my surprise I’d say that this copy of “The Monkees”  is probably the best vinyl pressing I’ve ever heard with “More of The Monkees” not far behind.

I take one point off from the sound of “More of The Monkees” as two songs have been rearranged in the playing order (“I’m a Believer” and “She”) and weirdly enough both songs sound quieter and a bit muted whereas the rest of the album just blooms open like a flower with great separation and terrific sound.

It’s amazing how much better these earlier Japanese pressings sound as compared to the 1980’s Arista Records versions. These are so close to the original U.S. Colgems sound wise and with the improvement in pressing quality they just may be the way to go if you want to hear these albums on vinyl.

All three albums are not only quite impressive sonically but the covers are pretty nice as well.

The German “Instant Replay” has a nice laminated cover which really makes the crazy colors pop on the front cover and both of the Japanese covers are made from nice thick paper stock with “More of The Monkees” being exceptionally thick as well as textured to boot.

Plus “The Monkees” pressing has a completely different cover to the more familiar U.S. pressing and also includes some crazy artwork on the inner sleeve which is a real treat (see above).

All in all three great foreign pressing discoveries and much better sounding than UK Monkees pressings which I see more of but pale in comparison sound wise to these gems.

As usual take a gander above at these three beauties and if you’re a fan of vinyl and a Monkees fan it might be worth your while to try and track down some of these foreign pressings as they might just surprise you with how good the sound.

Until next time be well and see you soon!