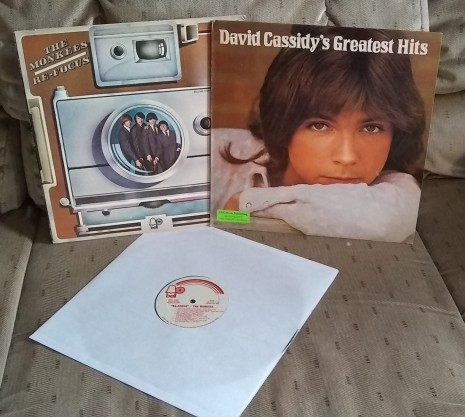 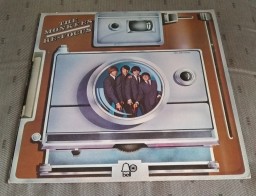 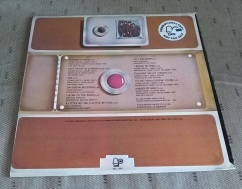 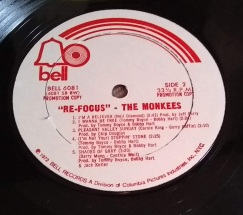 Well, time does fly. Last time I dropped down into Webland it was still 2019 and it was right before New Year’s Eve.

Wham bam it’s now February 2020 so I thought it might be high time for a new blog post.

Today I’m going to share a couple of albums that I got in the past month or so that I think are really fun. Both of them happen to be on Bell Records and both of them are promo copies!

Now I’ve gone nearly 50 some years and have never run across Bell Records promo copies and now in the last six moths I’ve bought three of them (note: see my post from a few months ago about my promo copy of The Partridge Family’s “Up to Date”).

As I said in my blog of my promo copy of The Partridge Family’s “Up to Date” there’s definitely a difference in sound quality with the promo Bell Records pressings vs their non promo cousins.

And when it comes to these two promos that continues to hold true.

Let’s start with The Monkees “Re-Focus”.

Looking back “Re-Focus” is sort of an odd title as it’s basically a greatest hits album (wouldn’t you think mentioning hits would be a good idea) that was I’m sure designed to appeal to the Saturday morning crowd who were enjoying re-runs of “The Monkees” TV show which was then running on ABC-TV.

The album is actually a really nice selection of songs but would have been perfect with the addition of “Valleri” which was one of The Monkees biggest hits and their last Top Ten hit to boot.

(Note: this album was re-released with the exact same songs in 1976 on Arista Records and re-named “The Monkees Greatest Hits”. It also happened to eventually sell over a million copies in this configuration as well)

Nonetheless the album cover is fun and I remember seeing this album in cut-out bins throughout the 1970’s (which is where it was purchased for me originally) and I also remember being really surprised it was on a record label other then Colgems which I thought was really cool.

The promo pressing which I found a few weeks ago sounds really nice and is definitely a much better pressing than my old stock copy.

While it does tend to sound thin with the bass lacking on certain songs it’s a super quite pressing and overall sounds nice with better separation and clarity as compared to the regular copy.

I’m guessing that the tapes for this album were compiled from copy tapes which wouldn’t surprise me and may account for the overall thin sound present on several tracks.

“David Cassidy’s Greatest Hits”, which I just found two weeks ago, on the other hand sounds spectacular!  In fact the songs on this pressing may be some of the best sounding versions I’ve ever heard of these songs.

Not only does the album look like it’s never been played it plays perfectly quiet as well with a clarity and presence to all the songs that I wasn’t expecting.

(Note 2: the album contains all the biggest Partridge Family hits as well as David Cassidy’s solo hits for Bell Records)

Seeing as this is a compilation album I was kind of expecting it to sound a bit like it was compiled from copy tapes much like “Re-Focus” but every single song on this pressing sounded superb and much better than I would have guessed it they would sound. The songs must have been taken from the original tapes or this Lp is just mastered really well as the sound is terrific.

Much like my promo copy of The Partridge Family’s “Up to Date” this promo copy absolutely smokes the stock copy version of the album (yes, I own a regular pressing too) with much better clarity and bass then the normal pressing.

I’ve always thought that was a careless and sloppy mistake but with Cassidy’s star power diminishing in the United States I’m guessing Bell Records just wanted to cash in quickly on any sales a hit collection may bring and if they made a mistake oh well. I love the song “Blind Hope” at least so I’m glad it’s on the Lp.

The really intriguing thing about this particular promo pressing of “David Cassidy’s Greatest Hits” is the EMI Music Publishing Archive sticker on the front of the Lp. That’s another first as I’ve never had a promo Lp that was from a music publisher’s archive library. Very cool!

I’m guessing that’s why it looks like it’s never been played as  I’m guessing it probably hasn’t ever touched a turntable until mine.

Well, there you go, 2020 is off and running on this blog and in interesting style! I hope the year brings some interesting musical discoveries and whatever I may run across I’ll be sure to share with you fine folks.

Until next time be well and above you can take a gander at these two promo Bell Records beauties.