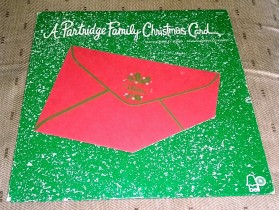 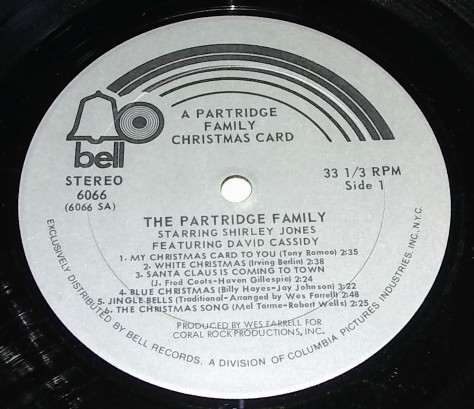 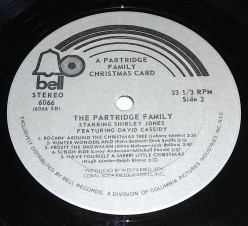 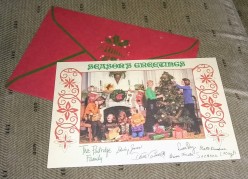 You realize it’s only ten days until Christmas, right?

As I’m sure you’re frantically getting ready (or maybe frantically avoiding) for the mad rush to buy Christmas gifts, meal planning, etc., I thought this might be a good time to do my annual Christmas post.

And in my neck of the Internet world Christmas time means music. Not only music but taking a dip into physical media music – naturally, what else?

Ahhhh Christmas 1971. I would be lying if I said I remember it well but oddly enough (or not so oddly if you know me at all) I do remember getting “A Partridge Family Christmas Card” as one of my Christmas presents that year.

The fleeting memory that pops into my head is of me thinking how cool it was that the album came with an actual Christmas card (the first pressing of the album indeed had one tucked into a slot on the front cover) and also an irritating memory of one of my older brothers disgust at a Partridge Family album as he thought they weren’t cool.

(Note: I’m sure The Partridge Family still aren’t cool in many sectors but hey there’s no accounting for people’s lack of taste lol!)

Seeing as I was only five years old at the time I’m surprised I remember anything at all from 1971 but whenever I take a glance at the cover of “A Partridge Family Christmas Card” those memories come flooding right back into my mind.

I also remember that for the next two or three years at Christmas time I would see the “A Partridge Family Christmas Card” album flooding record bins at my local Kmart or Ayr-Way stores. The funny thing was I also distinctly remember being amazed that the cool Christmas card that was on my copy had been replaced by a photo instead – ahhh.

I thought it was so strange that they would do that and remember being glad I had the first issue copy with the actual Christmas card.

Fast forward a few decades or so to last week when I finally came across this 1972 pressing of “A Partridge Family Christmas Card” (with just the photo of the
Christmas card on the cover) once again. Lo and behold not only was this beauty still sealed but it seemed to be a record club pressing to boot (I think anyway – notice the R113816 on the lower rear cover).

At the time I thought this pressing was lame but since I haven’t seen this reissue cover in over 40 years or so I was overjoyed to see a copy and one on such perfect condition was hard for me  to resist buying it.

Of course I bought this new/old pristine copy (shocker) since it wasn’t too expensive and decided to do this blog featuring all the U.S. pressings I own of this album plus the CD version.

As you can see from the photos above the new copy is immaculate and you also see the first vinyl pressing as well plus the Razor & Tie CD version of the album from 1992.

Of course I have some major nostalgia fueled feelings about this record but it is a really fun Christmas album and it contains what I think should have been a stone cold classic Christmas song “My Christmas Card to You” which is one of the best songs ever released on a Partridge Family record.

Written by Tony Romeo, who also wrote The Partridge Family’s biggest hit the No. 1 “I Think I Love You”, “My Christmas Card to You” contains an irresistible and catchy hook and as well as a terrific David Cassidy vocal and some charming lyrics which equals pure pop Christmas bliss.

Too bad it”s not heard on the radio at all anymore as it really should be part of any pop music fans Christmas playlist.

The CD pictured above sounds pretty good as well and has been reissued once again by Sony Music (this version is long out of print) but I don’t own that copy so I can’t say how it sounds but it does look pretty similar to the Razor and Tie CD I own (see above).

Well there you have it.

Until next time be well and …

“To you and all your family, your neighbors and your friends, may all days be happy with a joy that never ends” (from “My Christmas Card to You” by Tony Romeo and recorded by  The Partridge Family)