Inside Metal box with two litographs

Inside red booklet with 4 discs

Back of large booklet 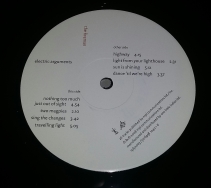 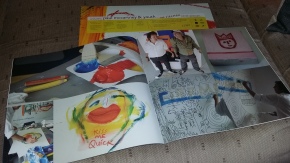 In this day and age of the special edition vinyl/CD sets – including deluxe sets, super deluxe sets and expensive reissues of all kinds – some box sets stand head and shoulders above all the others.

Today I’m going to take a look at what I consider to be the super daddy deluxe set of all the box sets I own – the super deluxe limited metal box issue of The Fireman (aka Paul McCartney and Youth) “Electric Arguments”.

“Electric Arguments” came out in 2008 and was the third album that McCartney released under the Fireman banner.

(Note: The Fireman was Paul McCartney’s collaboration with the musician Youth)

The first two Fireman albums – “Strawberries Oceans Ships Forest” from 1993 and “Rushes” from 1998 – were full-on experimental works containing ambient music with little or no vocals mixed with techo and a bit of rock that let McCartney, along with musician Youth (Martin Glover), create sound pictures that were much more esoteric then McCartney’s more mainstream pop/rock music.

In 2008, “Electric Arguments” came along and while it contained the same experimental vibe of its two predecessors, it was much more akin to McCartney’s  “normal” studio work featuring more structured songs and McCartney’s vocal work – think Paul and Linda McCartney’s album “Ram” meets Brian Eno and Beck.

While the first two Fireman albums sort of came and went under the radar, “Electric Arguments”  garnered some of the best reviews of McCartney’s solo career and though not a huge seller is now considered one of the best solo works McCartney has produced outside of The Beatles revered catalog.

Now, believe it or not, I was actually a bit lukewarm to “Electric Arguments” the first time I heard it. It took a few listens to really hit me but now it’s one of my favorite Paul McCartney albums.

In fact “Two Magpies”, “Sing the Changes” and “Dance ‘Til Were High” are three of my favorite McCartney songs and the album as a whole is really one of McCartney’s best.

I can’t remember exactly when the deluxe metal box set came out – must have been released a few months after the regular CD. I remember it was only available through McCartney’s Website and was very limited.

I do however distinctly remember that it took FOREVER from the time I ordered the box to the time I actually received it as it was delayed time and again for unknown production reasons.

I remember when it did finally arrive that it weighed a ton and looked positively amazing when I first took it out of the sack it was mailed in (still have the mailing sack lol, see above).

The deluxe metal box set contains 2 CDs, the main album and a CD of bonus tracks, as well as a DVD with a Hi-Res version of the album along with videos and a second DVD that contains multi-track audio allowing one to “mix” five songs from the album.

There is also a 2 Lp vinyl pressing in the box along with a large photo booklet, two lithographs and a nice red cloth bound booklet which houses the 4 discs mentioned.

“Electric Arguments” was originally released on the One Little Indian record label from the UK and has also been reissued recently again on vinyl in a limited, numbered pressing featuring the CD as well which I also happen to own (see photos above).

Take a look at the photos of this truly magnificent set and if you’ve never heard of this album definitely give it a spin. You’ll be surprised at how much fun it is to listen to and how much more there is to McCartney’s music than just silly love songs (which I also happen to really love as well!).

Until next time, be well and enjoy what’s left of the rapidly fading summer!