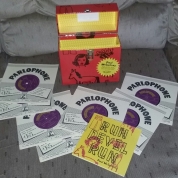 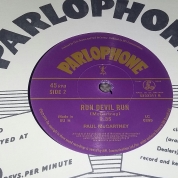 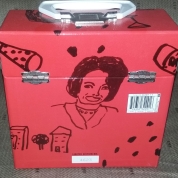 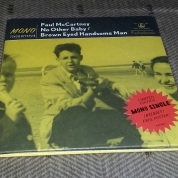 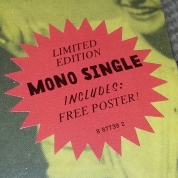 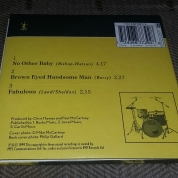 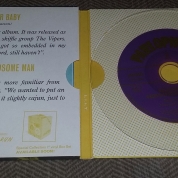 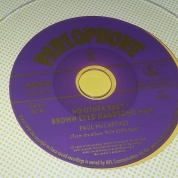 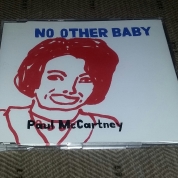 Okay, anyone out there remember having a small record carrying case full of (usually) beat up 45’s that you carried around with your portable record player?

If you’re of an age – and I most certainly am – you probably wax nostalgic from time to time about the “old days” and today we’re doing just that – waxing nostalgic for 1999.

If you’ve read this blog more than once you probably realize that I rarely wax nostalgic for anything from the 1990’s BUT in this particular instance I’m looking back at a couple of really nifty Paul McCartney collectibles so not to worry, I’m still firmly planted in the past lol.

Back in 1999 (I never get used to the fact that that’s nearly 20 years ago!) Paul McCartney was just overcoming the death of his wife Linda the previous year and he himself was in a reflective mood as well.

McCartney released his second oldies laden album entitled “Run Devil Run” which featured nice rocking covers of songs like the more obscure “She Said Yeah” and “I
Got Stung” along with more familiar fare like “All Shook Up” and the unexpected yet lovely cover of Ricky Nelson’s “Lonesome Town”.

There were also three terrific McCartney originals on the set done in fifties rock style as well – the title track “Run Devil Run”, “What It Is” and “Try Not to Cry”. All three were terrific old school McCartney rockers and fit the mood of the collection perfectly.

When this album was released McCartney had been laying low for several months since his wife Linda’s death from cancer in 1998 so it was a great relief to see him recording again and this set is full of great playing (David Gilmour of Pink Floyd was one of the stellar guest players on the album) and great singing.

One of the coolest McCartney collectibles I’ve ever seen accompanied the release of “Run Devil Run” – a really nice retro-looking red record carrying case filled with eight 45’s featuring songs from the album plus a bonus track called “Fabulous”.

Each of the eight 45’s were housed in old style Parlophone sleeves and vintage purple Parlophone style labels which just look ‘fabulous’ (sorry couldn’t resist) and were accompanied by a booklet that listed information about each song in the set.

Really to this day this is one of my favorite McCartney collectibles (see photos above) and was pretty hard to find at the time of its release and is still pretty hard to locate as it was an import from the UK and not that many of them were made.

There were also two really nice CD singles released in the UK (also above) and of the two my favorite is the limited mono CD single (complete with with mini poster) that features true mono mixes of the songs “No Other Baby”, “Brown Eyed Handsome Man” and the bonus cut from the vinyl set “Fabulous”.

As you well know by reading this blog I LOVE mono mixes and these special mono mixes are a real treat as they fit the time period of the material so well and better yet just sound great!

If you’ve never heard of this cool 45 set take a gander above and if you’ve also never listed to the “Run Devil Run” album you should definitely try and track that down either in physical form or online as its a really fun collection of songs.

Of course the CD of the “Run Devil Run” album will work just fine but if you want a taste of the era in which most of this songs came to be track the 45 set down and really get a nostalgic rush, as well as a bit of fun!

Until next time, be well and rock on …