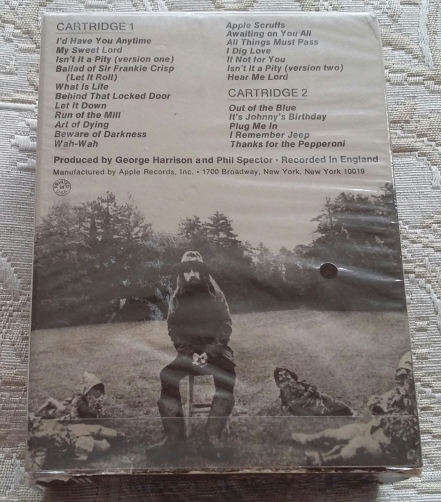 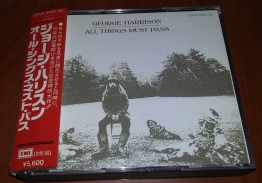 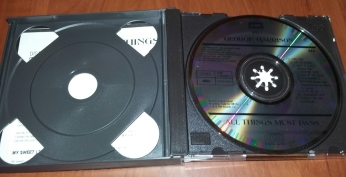 They say politics makes strange bedfellows (which is true) but I also think that phrase may apply to music collecting.

Today I’m taking a look at two disparate versions of one of my all-time favorite recordings “All Things Must Pass” by George Harrison (see photos above).

One of the versions shown above sounds pretty average (if you can still play it!) and would be considered one of the worst sounding ways to listen to this album and the other is considered by many to be the best sounding CD version of the album ever released.

You see today I found a really groovy near mint 8-Track version of “All Things Must Pass” in its original box WITH the shrink wrap still on it which got me to thinking about featuring it along with my favorite CD pressing as my latest blog post.

Now I do have access to a functioning 8-Track player but I didn’t buy this version for its sound quality. I bought it for its complete and glorious sentimental value and lovely box.

(Note: THAT my dear friends it what’s called being a collector, I’m sure others can fit in another word but I’m sticking with collector!)

This 8-Track version just transports me back to the first time I stumbled upon this epic album in a record store around 1978.

The store was called Karma Records and I distinctly remember eyeing the 8-Track version in its tiny box yet impressive looking box and then going back and forth between it and the vinyl version until I finally caved and purchased the vinyl 3-Lp set.

At that time my family had an old Magnavox console stereo (canary yellow I might add) with an 8-Track player in which I played several Beatles and solo Beatles 8-Tracks that I bought for cheap in marked down 8-Track bins at the Musicland music store in my local mall.

For some reason I decided that an 8-Track of this album wouldn’t do and went with the vinyl version. (I’m sure the mention of a poster on the hype sticker on the shrink wrap of the album played a factor in that decision as well.)

Anyway, this first vinyl version I owned of “All Things Must Pass” was on the orange Capitol label and I must say the album took a hold of me from the first time I placed the needle on side 1 and heard the lilting, mellow guitar of “I’d Have You Anytime” waft out of my old Magnavox console speakers.

I LOVE the murkiness of Phil Spector’s (who co-produced of the album) Wall of Sound production which lends a such mysterious and otherworldly feel to the songs on the album making them sound like the musical equivalent of George Harrison’s Gothic mansion Friar Park which is featured on the cover and poster that came inside the album.

So discovering a near mint version of this album on 8-Track (cheaply I might add) just sent me on a major nostalgic trip and made me feel like I could reach back in time and touch the counter of that long-ago incense smelling Karma Records.

Since the 8-Track isn’t by far my best sounding version of “All Things Must Pass” I  thought it might be nice to feature some photos of my favorite sounding CD version of the album as well – just for grins.

The first Japanese CD issue of “All Things Must Pass” from 1987 (with the catalog number of CP-28 -5459.60) is considered by many to be the best sounding compact disc version of the album with nice full bass and lovely sound especially on the acoustic numbers.

This CD’s sound isn’t flawless as the title song “All Things Must Pass” suffers from being mastered too low but overall this version sounds much better most CD versions of this album and is near the equal of the recent CD reissue from 2014 which sounds pretty darn good as well.

So there you have it. Two nice – and different – versions of the seminal album from George Harrison and truth be told one of the best solo albums released by any of the four ex-Beatles.

Take a gander at some of the photos and if you were around when 8-Tracks were all the rage then you too might have a fun trip back in time.

If you’ve never had the pleasure of hearing “All Things Must Pass” in any version then you must run out to a record store or to your computer and rectify that situation right now!

I will share some of my favorite vinyl versions in later posts but for now I’m going to try and dig up some moldy old headphones from the 1970s and see if I can take this groovy new 8-Track set out for a test spin.