What is it about anniversaries that makes people sit up and pay attention?

Is it the fact that something has longevity whether it be a relationship, a favorite event, movie or recording?

Whatever the reason human nature dictates that most people enjoy a good anniversary and with this blog post I’m going to celebrate another one!

Fifty years ago, on November 6, 1967 to be exact, one of my favorite pop/rock albums was released into the eager hands of fans around the globe:

“Pisces, Aquarius, Capricorn and Jones, Ltd.” by The Monkees; the group’s fourth long-playing record and fourth No. 1 album.

In my opinion this album holds a place in the upper echelon of pop albums from that era including “Sgt. Peppers Lonely Hearts Club Band” by The Beatles (yes I said it and yes I’m a huge Beatles fan), “Between the Buttons” by The Rolling Stones and even “Blonde on Blonde” by Bob Dylan.

I’m not saying “Pisces, Aquarius, Capricorn and Jones, Ltd.” is by any means better than these albums but it certainly is strong enough to be mentioned in their company.

In fact anyone who is skeptical of The Monkees contribution to the pop culture landscape should give this album a spin and experience just where the hippie culture collided head-on with commercialism bringing a taste of the counter culture to mainstream America.

Think of it, those madcap teen idol Monkees who were too busy putting people down on television were now singing songs about the perils of drug dealers (“Salesman”), the sordid free love ode to a gang bang sung so sweetly by Davy Jones (Harry Nilsson’s “Cuddly Toy”) and the soul numbing rise of suburbia (Goffin and King’s “Pleasant Valley Sunday”).

Also addressed on the album were the stirrings of personal greed that would become omnipresent in the 80s (“The Door into Summer”) and Jones psychedelic moog  synthesizer drenched “Star Collector “(written again by Goffin and King) about the growing rise of the rock star groupie.

Even the Mike Nesmith penned song “Daily Nightly” took a look at the resistance of the establishment toward the growing youth culture in L.A. by poetically recounting a Sunset Strip riot in late 1966 where local youth protested the city of Los Angeles’ strict curfews for those under the age of eighteen.

Really this collection is quite a leap forward for The Monkees, at least in terms of subject matter, in which the group really began to assimilate the times in which they were living into the music they were recording.

Looking back it’s quite amazing to see how the group wrestled control of this HUGELY popular money machine (The Monkees TV show and music) from the likes of Don Kirshner who was originally the music supervisor for The Monkees on screen and on record.

Under Kirshner, The Monkees were enormously successful and turned out some excellent pop music such as “Last Train to Clarksville” and “I’m a Believer”.

Unfortunately Kirshner became so enamored of his own ego that the music recorded under The Monkees banner, especially on the second Monkees album “More of the Monkees”, was quickly in danger of becoming too much of a product like a brand of soap.

Much like the second season of The Monkees TV show in which the madcap humor turned more toward the absurd and surreal (which was perfected by the Monty Python British TV comedy troupe just a couple of years later) the group quickly began to evolve from the cute and cuddly.

In just a few short months songs like the sugary sweet Davy Jones sung ballad “The Day We Fall in Love”, from the Don Kirshner era, were replaced with the likes of the slightly risque “Love is Only Sleeping” on their fourth album to even a Jones composed Brazilian influenced ballad about betrayal and broken relationships called “Hard to Believe.”

Due to pressure from Mike Nesmith and Peter Tork specifically the group won the right to play their own music and pick their own songs to record which resulted in this magnificent fourth album and all the music they recorded thereafter.

To me the “Pisces, Aquarius, Capricorn and Jones, Ltd.”album is the beginning of The Monkees looking outward toward their surroundings and trying to synthesize their experiences of fame with the current counter culture ethic.

From a purely artistic basis “Pisces, Aquarius, Capricorn and Jones, Ltd.” Is The Monkees high watermark as a recording group.

I may prefer the slightly more garage rawness of “Headquarters”, their third album, but this fourth album song for song is probably their best work.

So with all that said, I thought I’d celebrate this great album and show a few of the CD versions that I own along with a groovy German vinyl copy of the album that has a slightly different cover to the U.S. original version.

There’s also the Japanese CD from 1992 that features the most unique cover for this album I’ve ever seen!

As you can see from the photos, above and below, I’ve even saved every sticker and insert that came with the various CD versions of this album.

Even after fifty years of listening I still can’t get enough of this album and the songs therein.

Check it out – even if that means streaming the album online or wherever. It will be well worth your time!

Until next installment- Ta Ta for now! 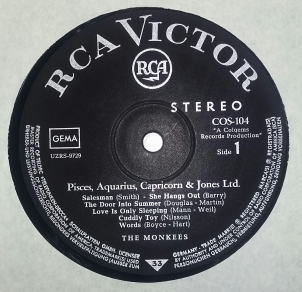 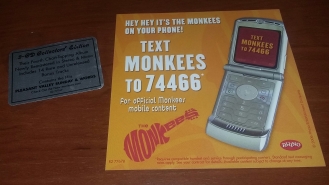