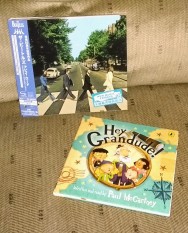 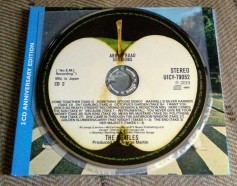 Okay, I’ve said it before and I’ll say it again. I LOVE SHM-CD’s!

I know, I know, many out there in sanity land (the majority of people) think it’s crazy to buy these Japanese versions of CD’s that you can buy at any store in the U.S. but I swear they sound better.

I don’t know what’s going on – wishful thinking, psychosis or what – but sometimes when I buy these SHM-CD versions I’m surprised at just how smooth and clear they sound as compared to the regular CD versions.

This latest blog is the perfect example.

I just got the 2 SHM-CD version of The Beatles recent “Abbey Road” Deluxe 2 CD set with the first CD containing the 2019 remix and the second CD containing some choice outtakes from the sessions and i must say it’s impressive.

Not only does it sound great but as usual the Japanese version is made and packaged better than the standard CD issues which seem to me to be getting more cheaply made which leads to problems playing them as I have seen reported online.

This new SHM-CD set plays well and looks like much more care was taken in its production which alone makes the SHM-CD version worth tracking down in my humble opinion.

When I first sat down to listen to the set I surprised at how much better I liked the 2019 remix on this SHM-CD as compared to the standard CD. First off it didn’t seem quite as loud to me. For example when I played the remix disc in the big set (see my previous post of the 3 CD/Blu-Ray “Abbey Road” set) it sounded very pumped and in your face.

This new SHM-CD didn’t hit me in the same way. It sounds much more in line with the blu-ray from that big set which definitely sounds better than its CD counterpart.

I don’t do the technical waveform readings that I see online so I can only go by my ears but my ears tell me this new SHM-CD sounds better than the regular CD pressing for sure and certainly better than the 2019 remix CD disc from the big set.

I said a coupe of blogs ago when I reviewed the big “Abbey Road” set that this new 2019 remix was my least favorite of the recent Beatles album remixes but as time has gone on I think it’s now my favorite.

The 2019 remix isn’t a drastic remix but adds more clarity and I enjoy the way the background vocals pop out unexpectedly on certain songs and the small differences in the placement of instruments that it makes this album seem to come alive to me in a fresh way.

To me the original mix will always be the canon version but I truly can say that I love this new remix and would love to see a remix like this for both “Let it Be” and most certainly my favorite Beatles album “Revolver”.

I’m not always a fan of the remix phenomena but if they’re done as well as this disc then I’m excited to see more. I certainly hope these don’t replace the original mixes as they are a time capsule of their creation but these new mixes can be fun.

Besides my now triple dip into the new “Abbey Road” experience I also managed to get a hold of the new Book on CD for Paul McCartney’s new picture book “Hey Grandude!” I haven’t bitten the bullet and bought the actual book yet as I would rarely ever read it but I read online that there was a CD version read by McCartney himself with some new McCartney incidental music on it so I thought why not?

I didn’t see the CD version available stateside but it is readily available online from Amazon UK. If you’re a McCartney fan I’d say definitely try and track it down as it’s a lot of fun.

On first listen I was pleasantly surprised at how much I enjoyed playing the “Hey Grandude!” CD. It’s only about 11 minutes long but features McCartney doing an excellent job of reading and acting out his book along with some typically lovely McCartney guitar noodling.

Though I wouldn’t say it’s quite a full song the short guitar piece he does play is very melodic and enjoyable and sounds great. Besides any time I get to hear some new McCartney music is fine by me!

Well there you have it. A late October Beatles collecting update. For those of you out there who still enjoy physical media there’s a lot of Beatles goodies to feast on lately and these two gems should be on your list for sure if you decide to track them down.

There are the usual photos above so feast your eyes and enjoy.