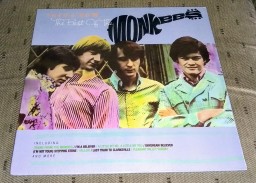 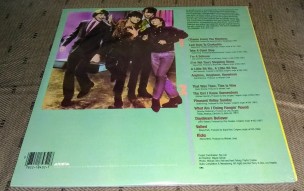 I usually don’t post things back to back but since I had such a great weekend at antique shops I thought I’d share two more things I found.

As I said in my last post I really had no expectations of finding anything music related this past weekend when I went shopping at two small antique stores but as the saying goes you just never know what you’ll find.

Isn’t it the way it goes, if you’re not expecting to find anything you happen upon some really cool discoveries.

In this Part 2 I thought I’d share a really lovely piece of sheet music from The Beatles (“Help!” from 1965) and a sealed record club copy of The Monkees 1986 comeback album “Then & Now: The Best of The Monkees” on Arista Records.

I must say that the first thing I stumbled upon was the “Help!” sheet music and while I thought it was great I really don’t collect much sheet music. What sold me was not only the great cover shot from the film but the back cover with all the picture of other Beatles music books.

I strolled around about five minutes but my mind keep wandering back to this piece of sheet music.

There’s nothing that says time machine to me more than old sheet music and since this looked so nice and wasn’t very expensive I caved and bought it.

Really though it’s one of the best looking pieces of Beatles sheet music I’ve ever come across and just looks so great no matter if it’s rare or not.

My other wonderful find – the sealed “Then & Now: The Best of The Monkees” lp – was also too good to pass up as this particular album brings back so many memories for me of The Monkees 1986 tour and how it was so amazing that the group not only came back from the dead but literally exploded in popularity again much like 1967 revisited.

I had this album on vinyl once upon a time but as the years went by I gave it to a friend and never got it back. I was content with the much longer 25 song CD version and since my interest in vinyl really dropped around that time I let it go.

I’ve been meaning to track this album down again on vinyl and a sealed copy for under $10 seemed too good to pass up.

It’s a Columbia Records Record Club version, notice the CRC in the photo above, so I’m curious if it has any mix variations like the 1986 “Daydream Believer” remix but alas since it’s sealed I may never know.

Someday I may break it open and give it a spin but for now it just looks so purdy and new I think I’ll keep it in its sealed time capsule state.

Well again that’s all for now, I promise. I was just so thrilled by the holiday weekend and terrific finds that I felt like sharing some photos.

As usual take a look at the photos above and until next time happy hunting yourself and take care!