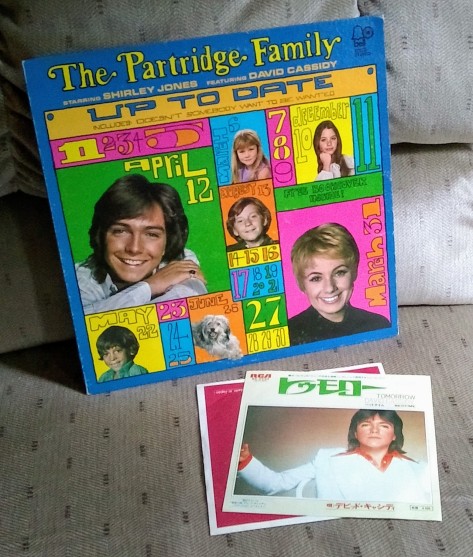 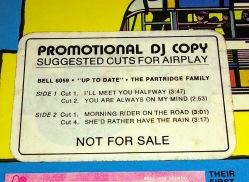 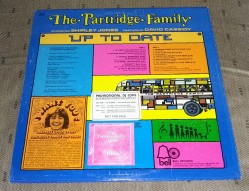 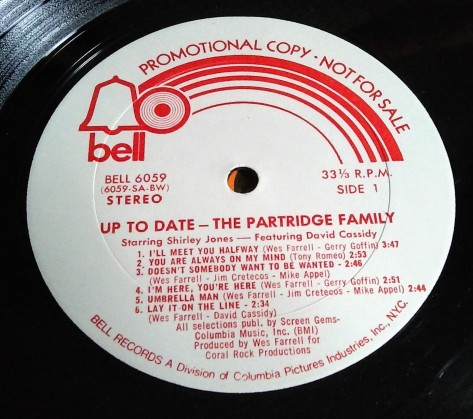 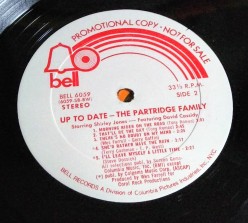 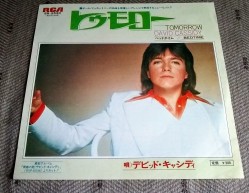 Okay, sometimes you just have lady luck on your side.

This past Labor Day weekend I spent a lovely rainy day on Sunday out and about eating an Italian lunch and by chance stopping into a couple of small antique stores in a small town not too far from where I live.

As always I’m on the lookout for records and/or old music memorabilia but realistically I usually expect to find nothing. And if I do it’s most likely a beat up copy of “Meet the Beatles” with the back cover either missing or haphazardly taped together with a record so worn you can’t see the grooves anymore with a price tag of $75.

Well, much to my surprise I found two fairly rare records that I personally have never seen or run into before – and here’s the kicker BOTH for the combined princely sum of $10. Yes, that’s $5 each!

As luck would have it I found a VG++ promotional copy of The Partridge Family album “Up to Date” (which happens to be my favorite Partridge platter) and a Japanese 45 of a David Cassidy single from 1976 called “Tomorrow b/w “Bedtime” from his excellent but obscure album called “Home is Where the Heart Is” on RCA Records.

Now to say I was shocked and happily surprised to find these records is an understatement. Not only was I not expecting to find any records of any kind (these stores didn’t seem like record type antique stores) but to find two rare and obscure records both in great shape and cheap – well needless to say since my luck seemed so good I bought a couple of lottery tickets as well.

The funny thing is, to me anyway,  I had just recently read on online about how good promotional Partridge Family Lp’s sound as compared to their commercial counterparts and I was curious to track one down and see for myself.

I never find them listed online very much and didn’t want to spend a lot of money anyway so these finds were too good to be true.

Now I’ll admit while these records are indeed fairly uncommon I’m sure not that many people yearn to buy them but since I’m somewhat of a music freak so to speak this was right up my alley.

Tonight I decided to clean this new promo Lp and play it along side a near mint commercial copy (this promo copy is marked NOT FOR SALE and was made for radio airplay) and see if I could hear any difference for myself.

Well, let me tell you that again I was pleasantly surprised. Not only is the promo copy a much better and quieter copy than the commercial pressing but the sound was so much better and fuller and open that I just was flabbergasted.

Every cymbal, organ and bass part just leap out of the speaker on the promo copy while seeming muted, flatter and less vibrant on the commercial copy.

Plus the commercial copy while practically brand new played with a ton of pops and clicks and sounds as if it was pressed off center, the more it played near the center the more it sounded like it was having pitch issues.

I just have never heard this album sound better than this promo Lp. It even knocks the best CD version I own (from Razor & Tie Records) which until now was my go to version of this album when I want to listen to it.

For all you fellow obsessives out there I also noticed that this promo record was pressed by Best Way I believe (notice the BW on the catalog number on the label) which I’ve also read are much better pressings of The Partridge Family records as they supposedly sound better. Yep, check that one off, they sure do – in spades!

The David Cassidy 45 also sounds superb and while I don’t really collect that many 45’s the fact that I’ve never seen this Japanese disc before and that it came in a groovy picture sleeve and happens to be a terrific cover of one of my all-time favorite Paul McCartney songs (and a rather obscure McCartney song at that) from Wings’ first album “Wild Life” – well I just couldn’t resist picking it up as well.

I must say that Cassidy really sings both songs on this 45 so well. When I was younger I was disappointed in Cassidy’s more soulful and less silky singing post Partridge as compared to the Partridge Family recordings. As I’ve grown older though I find his solo discs are really quite good and his singing, though different, is just amazing. He was truly a gifted singer no matter what the genre.

Anyway, that’s all for now. As usual take a peek above at my two new discoveries and who knows maybe lady luck will shine on me once more with my upcoming lottery ticket drawings!!!

Until next time be well and Happy September!