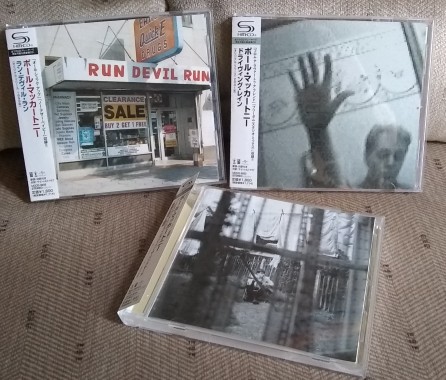 Well, today has quite the Paul McCartney vibe doesn’t it? With the news that McCartney is writing the music for a new musical based on the movie “It’s A Wonderful Life” and his recent CD/vinyl reissues and tour it seems if Paul McCartney is in the zeitgeist of the moment.

Well he is here in this blog as well as lately I’ve been on a Paul McCartney kick so I might as well keep the ball rolling. I thought I’d share some thoughts on some older Paul McCartney CD issues from the Land of the Rising  Sun – Japan.

These CD’s just happen to be SHM-CDs as well (to those readers of this blog – shocker I know). I’ve posted about SHM-CDs in the past – A LOT – but to quote the man himself “here I go again!”

Anyway, the three CD’s in question are Japanese SHM-CD issues on Hear Music of three McCartney albums from 1999 to 2005: “Run Devil Run”, “Driving Rain” and “Chaos and Creation in the Backyard”.

All of the above albums were originally released by Capitol Records but when McCartney signed with the Hear Music label in 2007 he also took his catalog of albums with him thus these CD reissues.

As a fan of the SHM-CD format, I have been seeking out as many of McCartney’s albums as I can find (and afford) and just recently came across these three CD reissues which are now out of print as McCartney has gone back to Capitol Records.

Of the three albums, one is what I consider one of McCartney’s best ever (“Chaos and Creation in the Backyard”) while the other two I’ve run (no pun intended) hot and cold on depending on my mood (“Run Devil Run” or “Driving Rain”). Actually these SHM-CD versions were a nice revelation as I hadn’t listened to the last two in a while and I  was pleasantly surprised.

There are quite a few really strong songs on both “Run Devil Run” and “Driving Rain”  that I had forgotten about including “She’s Given Up Talking”, “Driving Rain”, “Spinning on An Axis”, “Heather”, “Riding into Jaipur”, “Rinse the Raindrops”, “Run Devil Run”, “Try Not to Cry”, “What It Is”, “No Other Baby” and “I Got Stung”. All are excellent songs and performances and well worth revisiting.

I would still say that while both “Run Devil Run” and “Driving Rain” aren’t my most played McCartney albums they are better than I remembered them and both are very solid albums.

As usual these SHM-CD’s sound quite nice and have better sounding bass than their regular CD counterparts. The one drawback is that “Chaos and Creation in the Backyard” is mastered a bit too loud but this CD does sound nice and I prefer it to the regular edition.

I found these three SHM-CDs on sale, maybe they were clearing them out, so if you get the itch to investigate some of the Paul McCartney Hear Music SHM-CDs now may be the time.

As usual I’ve posted photos of the discs above. As physical media gets phased out it’s nice to have a record of what some of the variations of these discs looks like whether it be imported copies or various reissues.

Until next time be well and keep cool!!!