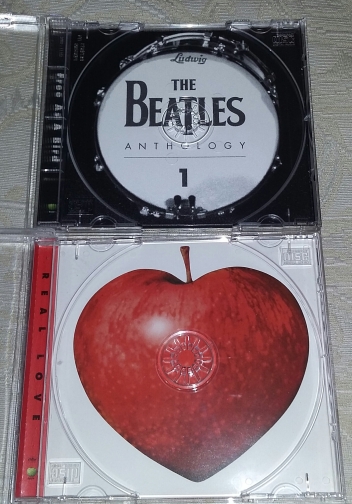 Well, here we are, in February. Again.

A cold February to boot and the shortest and longest month of the year if you know what I mean.

Nothing seems as far away as summer and sun right now but never fear later this week there’s at least some reason for celebration, for the non cynical that is, as Thursday is Valentine’s Day!

And that means hearts and chocolates and Valentine’s cards and … CD singles?

The two CD singles I’m looking at today came out in 1995 and 1996 and were part of the promotion for the colossally successful Beatles Anthology CD and Television project that reignited huge sales and attention for The Beatles as it featured two new Beatles songs – “Free As a Bird” and “Real Love”.

Both songs started out as demos written and performed by John Lennon solo at a piano in the mid to late 1970’s and both were treated to numerous vocal and instrumental overdubs by the three surviving Beatles to create two final Beatles songs to cap off their career and to publicize and promote their massive Beatles Anthology TV series and accompanying CD sets.

When the news of the three Beatles reuniting to complete the demo of “Free As a Bird”  came out in 1994, fans and music lovers everywhere were beside themselves with anticipation and endlessly debated how this reunion would sound.

At first it was just announced they would do one song but then Beatles fans wondered would there be a whole new album? A new tour? What would it sound like? How would Lennon, who died 14 years previously, sound on a demo that was turned into a full Beatles reunion track?

I can’t speak for anyone else but from the first moments I heard Ringo’s drums announce the arrival of “Free As a Bird” at the tale end of the first episode of The Beatles Anthology on ABC television in November of 1995 I instantly fell in love with the song and thought it was the perfect way to reunite The Beatles.

First off it sounded like The Beatles – the harmonies, the wondrous slide guitar work from George Harrison, the lovely bass from Paul McCartney and Ringo’s steady drums.

Secondly the ghostly Lennon vocal which many have criticized then and now seemed perfectly other worldly and fitting to me. It was so eerie hearing his voice poke out from the music as if he was reaching back into time and this world to rejoin something he had lost and missed.

And the lyrics – “Whatever happened to, the life that we once knew, Can we really live without each other?” – perfect, to me anyway.

The other reunion track, “Real Love“, is also another favorite though not quite as haunting as “Free As a Bird”. “Real Love” always seemed to be a wink and a nod to the 1967 era Beatles and is a quite good track with a better sounding, more clear at least, Lennon vocal.

With the clearer Lennon vocal “Real Love” sounds a bit more like a full studio reunion of the Fabs and a quite joyous one that’s also full of superb instrumental and vocal additions from Harrison, McCartney and Starr.

The results are so good that I still hold out hope that someday Paul McCartney and Ringo Starr may complete the third reunion track they worked on, “Now and Then”, but decided to shelve after a couple of sessions work on it.

While I love both tracks there’s something to this day so haunting about “Free As A Bird” that it remains my favorite reunion track and a worthwhile addition to The Beatles recorded canon.

Both of these reunion tracks sound like logical successors to the music from “Abbey Road”, the last album The Beatles recorded together. They sound like The Beatles circa 1995 yet with a touch of 1969 thrown in as well.

Plus those who bought the corresponding CD singles (see above) were treated to exclusive tracks that are well worth tracking down for any true Beatles fan.

The “Free As a Bird” CD single includes nice studio outtakes of “I Saw Her Standing There” and “This Boy” as well as The Beatles 1967 Christmas song “Christmas Time (Is Here Again)”.

The “Real Love” CD single includes a live version of “Baby’s in Black” from the Hollywood Bowl concert in 1965 as well as a remixed version of “Yellow Submarine” featuring a deleted spoken into by Ringo Starr and a lovely outtake of “Here, There and Everywhere” from “Revolver.”

All of these bonus tracks are exclusive to these CD singles (“Baby’s in Black” was finally released on the CD “The Beatles – Live At the Hollywood Bowl” in 2016 but in a different mix) and feature terrific performances that any Beatles fan would want in their collection.

As for “Free As a Bird” and “Real Love”, I know quite a few Beatles fans aren’t fond of the songs and don’t think their genuine Beatles tracks but to me they feature all four Beatles (something that wasn’t the case on several Beatles songs in the 1960’s) and they are the perfect coda to The Beatles career and should be included in Beatles hits collections as they were both hit songs.

The intent by Harrison, McCartney and Starr was to present two new Beatles tracks with all four members that sounded genuine and fit The Beatles legacy. I think they succeeded. They viewed it as if Lennon was just on a break and they were finishing up his tracks in the studio and that’s how the tracks come across to me as finished songs and not gimmicky in the least.

I would love it if the remixed version of both songs that producer Jeff Lynne (who produced both tracks originally) did for the” Beatles 1″ video collection were released with upgraded “Beatles Anthology” sets but at the moment that seems unlikely.

Be that as it may, these reunion songs are perfect for Valentine’s Day as they’re both about love and a celebration of love and what’s better than that! Definitely less fattening than candy.