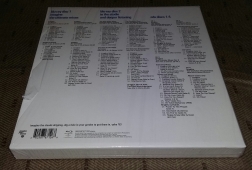 Well, here we are – a nice cool-ish October night and what should come my way but some new music. Err, at least some new “old” music.

You see last week I  took a look at the new 2 CD set of John Lennon’s “Imagine” album that’s being released tomorrow but tonight I’m highlighting the full set it was taken from – “Imagine” The Ultimate Edition.

This massive new box set takes an in-depth look at the making and recording of John Lennon’s classic “Imagine” album that was released in 1971.

The new “Ultimate” set consists of fours CDs along with two Blu-Rays and a beautiful hardbound book that details the making of the “Imagine” album along with a lot of really nice photos.

I said last week that the 2 CD set would probably be suffice for most Lennon or Beatles fan but having received this nifty box set today I must say this new full set is a thing of beauty!

It’s really nicely done all around! It’s smaller than I was expecting and everything about it is really thought out well and looks magnificent.

The nice thing about the full version  and what really has struck me today is the sound of the 2 Blu-Ray discs. Both Blu-Ray discs sound very impressive and provide such a wide range of material from the “Imagine” sessions.

Not only do you get the “Imagine” album in newly remixed form in HiRez sound but you also get a new 5.1 surround sound mix for the entire album as well as the singles and extras but you also get the Quadrasonic mixes which were done in the 1970s, “Imagine” out-takes in HiRez as well as 5.1, raw studio mixes that feature extended versions of the songs from the album but featuring Lennon’s raw vocals, raw studio mixes of the out-takes, elements mixes as well as evolution mixes plus a John & Yoko interview by Elliot Mintz. Whew!

Now I haven’t had time to listen to everything in this new set but what has struck me most is the terrific sound of the Blu-Rays! Everything sounds so much smoother and clearer and just fantastic on the Blu-Rays – a really nice upgrade from the CDs which sound quite good themselves.

As for the CDs, the first two discs in this set match the 2 CD set from last week while the other two CDs contain the raw studio mixes and the evolution mixes as well.

I’m not going to pretend this is a set you’ll play straight through all the time as it does get a bit tedious listening to various versions of the same songs over and over but in small bites it’s really a great way to get behind this album and really feel as if you’re in the studio with Lennon as he records it.

I must say I was worried about getting the full set but after having sampled it it’s really so well done and sounds so good – especially the raw studio takes – that it’s a no-brainer for me as I really love this album and even more so now that I can hear the tracks in a new light.

Take a glance at photos of the full set above (I’ve even included a few screen shots from the Blu-Ray discs!).

If you’re a Lennon fan or Beatles fan or just happen to really like this album then this set is a must. Buyer beware though – this is a massive listening experience for just one set of songs.

BUT the quality of the remix and the sound of the songs on the Blu-Ray discs is more than enough for me to recommend splurging for the entire  enchilada as they say!

There’s still the lovely 2 CD version for those who want to experience the remix as well as the out-takes but really this full set is done so well I find it hard to believe any Lennon fan being disappointed with the ultimate set if you have the extra cash to buy it of course.

Until next time be well and dream on!