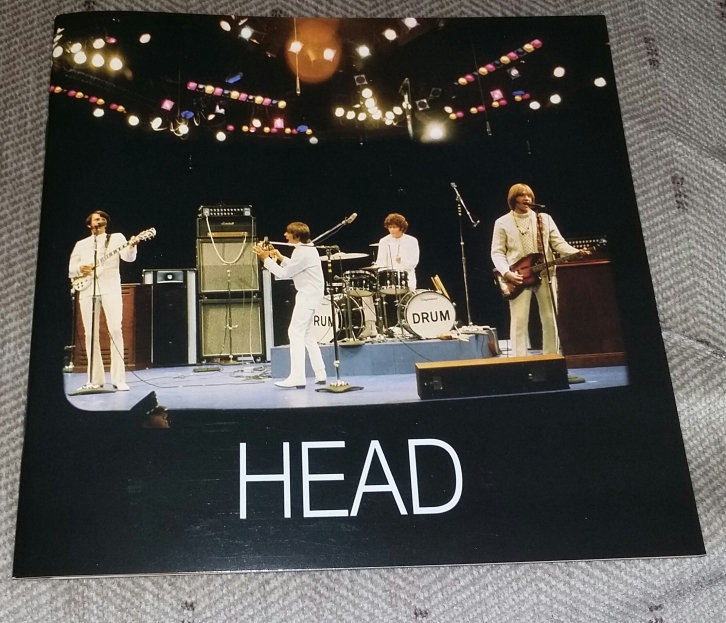 “Open your eyes, get up off your chair, there so much to do in the sunlight …” – from “As We Go Along” written by Carole King/Toni Stern and recorded by The Monkees

Today I am continuing my look back at The Monkees “HEAD”, both the film and the soundtrack in celebration if its 50th Anniversary:

Open your eyes indeed. The Monkees only cinematic creation, the feature film “HEAD”, celebrates its fifth anniversary this year and truth be told is just as confusing and mysterious as when it first premiered in theaters in November of 1968.

For fans of the group the cinematic version of The Monkees was quite a different experience than watching the them on their madcap TV show.

The film “HEAD” encapsulated the surreal and almost nightmarish quality of underground art films while featuring some sublime ’60’s pop/rock music and performances by what was considered at the time as one of the most commercial and safe bands of the era – The Monkees.

The film is a whirlwind of scenes and images that both pay homage yet ridicule at the same time some of the most popular Hollywood film genres of the golden age of film making.

To say that the film is a trip is an understatement.

To me “HEAD” – both the film and its accompanying soundtrack – are much more like a surrealism painting that’s come to life.

For starters “HEAD” has no traditional structure or plot. Instead of a longer version of the television show, “HEAD” consisted of a series of vignettes that featured The Monkees in different places, different times and different movie genres.

Basically the gist of the film is that the four actors who portray The Monkees are trying to escape from this imaginary black box which encases them.

To me the black box represents a brand – The Monkees – that while highly successful creates a stifling environment in which the members are treated like props to be used as cogs in this big Hollywood machinery.

Pop culture mavens have long commented on how “The Monkees” TV series was inspired by avant-garde film techniques but the film “HEAD” is really much more informed by the avant-garde than the television series ever was even taking into account some of the freakier second season TV episodes.

Instead of telling a linear story, the film  “HEAD” features vignettes that create different moods and reactions that end up leaving the viewer experiencing the movie on an emotional level rather than just a visual level.

The film goats the viewer into feeling frustrated, confused, amused, perplexed and entertained all at the same time.

The fact that you can watch this movie a dozen times and still not be able to concretely say what it’s all about speaks to the avant-garde bent the film makers melded into The Monkees project.

“HEAD” also manages to encapsulate the late 1960s counterculture vibe in a much less clichéd way that actually gives the viewer a better time capsule of the era than the typical Hollywood-ized depictions of the 1960s which focus on the stereotypical hippies and flower power slogans that one would see in a print or TV ad.

The film “HEAD” is also one of the first times something very commercial – The Monkees – was analyzed by its own creators and used as a means of jumping off in a new direction of creativity and film-making for that same team.

Bob Rafelson and Bert Schneider who created The Monkees TV show and project took the success generated by The Monkees and helped usher in a new era of film-making that stood outside of the old Hollywood system and was grounded more in gritty and real subject matter than traditional Hollywood fare.

Bob Rafelson, co-creator of The Monkees TV show and director of the film, along with screen writer Jack Nicholson (yes, that Jack Nicholson) seem to try and expose The Monkees as some sort of fake group much like everything else in Hollywood which is fake, tinsel and disposable.

I’m not sure if Rafelson’s aim was to completely wash his hands of the group but Peter Tork has said in interviews that Rafelson tends to focus on the dark side of life so that does seem probable.

But I don’t think Rafelson really took into account that while yes The Monkees on the one hand are fake – they were created to be a TV show not a group – with the success of the music from the show the group sort of morphed into being a genuine group thus becoming what they pretended to be.

I don’t think the producers and creators of The Monkees took into account the quality of the music produced for the project.

Since they hired other people to produce and create the music – and later the group itself took on that role – they didn’t see the music (at least initially) as anything other than promotion for the show.

But like most quality music produced whether in the 1960s or now, the quality of the music transcends its origins.

It didn’t and doesn’t matter how or why the music was created, the lasting quality of The Monkees music is just as much of a driving force for their continued success as the television show. They both enhance each other and are equally important.

Looking back, the film “HEAD” also seems to appeal to a lot of rock performers as I think they can see their own story.

The Beatles manager Brian Epstein took them out of leather and put them in suits and cultivated the “Fab Four” cuddly image.

The Rolling Stones cultivated the “anti-Beatles” blues grunge image while all the Motown acts were groomed to be stage performers and their music was part of a large machine created by Barry Gordy that cranked out hits featuring a stable of songwriters and studio musicians.

Even Elvis, the “King” himself, was branded and Hollywood-ized into a product to be consumed by a mass audience.

Music is and always was “show business”. There’s a lot of fake aspects to most musical acts but in the end its the music that was created which either stands the test of time or it doesn’t.

So the fact that The Monkees had their origins on the TV screen, one of the most divisive things about the group at the time, matters little when looked through the lens of 21st Century entertainment where everything is a brand and everything has become a product.

What the film “HEAD” portrays – the Hollywood effect on entertainers where they are manipulated and controlled – is the by product of all fame no matter what genre – be it music, film or now politics.

The film “HEAD” and the morphing of the group from television show to real performers is what makes The Monkees so interesting and so relevant today.

It’s amusing that at the end of the film The Monkees are carried away in a tank of water on a truck driven to be filed in the prop department at Columbia Pictures.

Little did the film makers realize at the time but The Monkees never would stay on the shelf and be forgotten like the props from a TV show – they live on like Frankenstein’s monster only to live again and again!

The soundtrack to the movie “HEAD” is also a unique and interesting thing itself.

Put together and sequenced by the the film’s writer Jack Nicholson, the soundtrack album creates a separate yet equally mystifying listening experience that mirrors the oddness and beauty of the film itself.

Dialogue from the film is liberally sprinkled through out the soundtrack which gives the listener a rather trippy and odd listen as most people who bought the record never saw the film and have no context for what the dialogue represents.

Yet the dialogue does convey the same subtle message that film does – there’s manipulation going on and who’s putting on who?

It also doesn’t hurt that the soundtrack contains six of the best songs The Monkees ever recorded: “Porpoise Song (Theme from “HEAD”), “Circle Sky”, “Can You Dig It?”, “As We Go Along”, “Daddy Song” and “Long Title: Do I Have to Do This All Over Again”.

For anyone who is really interested in all things Monkee or all things “HEAD” related the best and most complete representation of the “HEAD” soundtrack is the terrific three CD Deluxe box set that was released online in 2010 by Rhino Handmade, a division of Rhino Records who owns The Monkees catalog.

Not only does this box set feature every possible version and mix (both mono and stereo) and demo of songs from the film but it also includes some really tasty outtakes from the “HEAD” recording sessions and filming.

Chief among these outtakes are live 1968 recordings of The Monkees that were recorded in Salt Lake City while filming the “Circle Sky” segment of the film.

This short live set features lovely and searing versions of “You Just May Be the One”, “Sunny Girlfriend”, “You Told Me” and “Circle Sky”.

While a bit rough and crude, the vocals were recorded too low, it’s nonetheless a very exciting and lively recording that illustrates just how powerful and grungy the band sounded live playing as a foursome.

There’s also a really fun 22 minute session excerpt of all four Monkees being directed by Rafelson and Nicholson to record the “Ditty Diego” chant.

Three CDs may seem like overkill for the small number of songs that are a part of the soundtrack but really as a fan it’s fun to hear all the alternate takes and mixes just maybe not all at once. It’s really nice to have them but I usually don’t play them back to back but cherry pick from the set.

As per usual take a glance above at photos of the Rhino Handmade box set.

This box set, like all of the Deluxe Rhino Handmade sets, is the definitive look at the “HEAD” soundtrack and recordings and is a must to try and track down if your at all a fan of this Monkees album or film.

If you’ve never dipped your toes into the waters of the film “HEAD” or its soundtrack you must seek them down and give it a whirl. Just don’t expect the same Monkees experience from the TV show and you’ll find yourself digging a whole new Monkees vibe!

Until next time, be well and enjoy the onset of Fall this week!

(Note: There’s a brand new Monkees album being released in three weeks – The Monkees “Christmas Party” – more on that soon!!!)