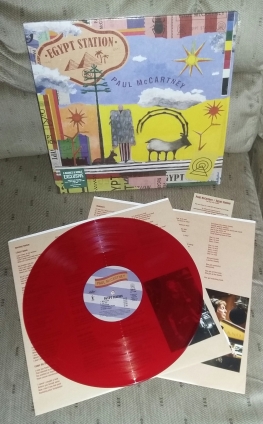 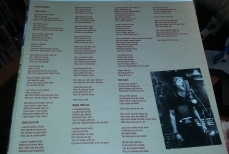 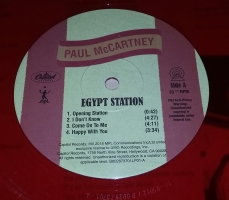 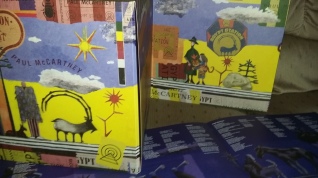 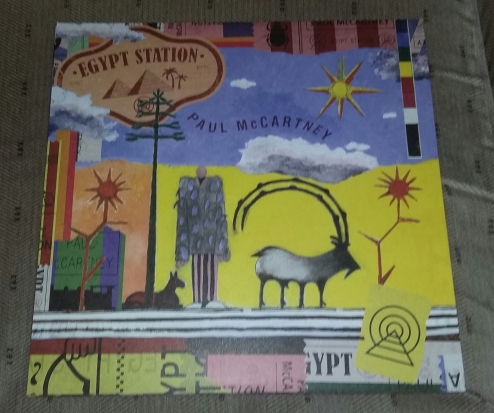 “My name is James, I’m a McCartney/Beatles addict. It’s been three days since I bought my last vinyl album …”

Okay, sometimes even I go off the deep end a bit in the collector’s pool. Every year I say I’m going to do better and then WHAM here I am again.

When it was announced that there would be multiple versions of McCartney’s new album on different colors of vinyl I said to myself ‘nah, I’m okay with skipping these’. Until I made the mistake of walking into Barnes & Noble just to see what their exclusive vinyl looked like – big mistake.

I even took a ride on the rationalization train (at the Egypt Station of course – I know, groan right) saying to myself I’ll buy it just to show on this blog.

Oh well, my madness is your gain.

Today I’m going to take a look at some of the exclusive versions of Paul McCartney’s new (and I must say excellent!) album “Egypt Station”.

There are several different colored vinyl versions of “Egypt Station” available at various locations on the Web and in retail stores as well a version of the CD with two bonus tracks that’s available only at Target stores int he U.S. (overseas its available at HMV stores).

For those who are sane, and you know who you are lol, the best deal going is by far the Target exclusive CD for the two bonus tracks. One-stop shopping and you have what I would consider the complete album.

Now, you may think bonus tracks means lesser but as is usual with Paul McCartney he sometimes leaves tracks as bonuses that are better than some tracks that made the album.

The two bonus tracks on the Target CD are:

“Get Started” – a really nice slice of Wings like pop that has shimmering guitars and a ’60s/’70s vibe that sounds just great. The riff that runs through out the song reminds me of the riff in The Monkees song “You Bring the Summer” from 2016  for those who are familiar. Nice track and nice production by Greg Kurstin who produced most of the tracks on the rest of the album.

“Nothing for Free” – this lovely slice of modern pop, produced by Ryan Tedder and Zach Skelton who produced “Fuh You” as well, is a much better realized song than “Fuh You” which did make the album. It’s modern sounding and very quirky but damn near irresistible if you ask me. It’s very much like McCartney’s bonus track from his 2013 “New”  album called “Struggle”. Weird yet oddly enchanting.

I would have preferred these two songs on the album proper so suffice to say if you’re interested in this album track this exclusive CD down, you won’t regret it.

Now, on to the vinyl.

I will admit that McCartney’s marketing people saw collector’s coming. My first thought was yikes, who would buy these knowing damn well I would!

There are both covers with the black vinyl pressings, the red vinyl isn’t a concertina cover but has printed inner sleeves, the orange and blue vinyl comes in a concertina style cover and has a lovely fold out lyric sheet as well but no printed sleeves and the green vinyl is in the same cover and style as the red vinyl.

Anyway, so far (he says admittedly) I’ve bought the regular CD, the Target CD, the red vinyl and the orange and blue vinyl. I must admit that the concertina cover is a must have as you get the two Egypt Station paintings by Paul McCartney that make up the album cover in all their glory in a magnificent deluxe cover that’s really worth tracking down.

(Note: I realize that this is all pretty wacky looking from the outside but welcome to the collector mindset. Aren’t you glad if you’re not inflicted?!!)

Feast your eyes above at my “Egypt Station” madness as it stands today. Btw, the Target exclusive CD also comes with a green sash to hold the concertina cover together as the regular CD comes with a red sash. Just in case you were wondering.

Until the train brings me to another stop next time  … be well!