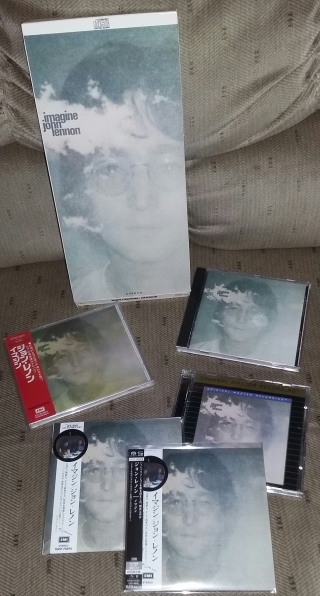 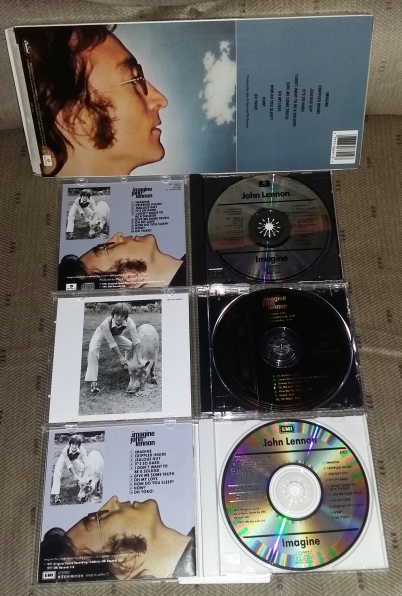 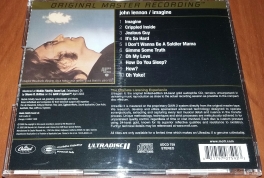 Well, it’s been a bit of a break from Blogland lately for me but tonight I’m back and in the mood for some John Lennon music.

This fall, most likely on Oct. 9th or thereabouts which is John Lennon’s birthday, a new CD or box set as well as DVDs, a book and who know’s what else will celebrate one of Lennon’s best and best-selling solo albums – “Imagine” from 1971.

The “Imagine” album has always been in my Top 3 solo Lennon albums (along with “Walls and Bridges” and “Double Fantasy”) so today I thought I’d take a look at the various pressings I own of this classic album on compact disc.

Yes, I know the compact disc is getting shafted in all corners lately – not a sought after collectible, not trendy, not cool, etc. – but it’s still my preferred way of listening to music and since this blog is about physical media – feast your eyes!

The first pressing I ever bought of “Imagine” was the first US CD release from around 1988 I believe. I remember reading that the first UK copy was kind of hissy and sounded only okay so I waited to buy the US version which came out a few months after the first UK CD release in 1987.

Well, the first US CD had been treated with the then in vogue “no-noise” process which used computer software to remove hiss which also unfortunately removed some of the sound quality as well.

The worst uses of the “no-noise” process resulted in music sounding like there was a blanket over the speakers and the highs being squashed but really the first US “Imagine” CD is actually pretty decent sounding though certainly not the best version out there.

I still own that first “Imagine” CD (of course, plus I still have the longbox for it too!) and it’s really not a bad sounding disc as the “no-noise” treatment I feel wasn’t used too heavily on it.

A few years later I stumbled upon a first issue Japanese CD (see above) of “Imagine” also issued in 1987 which didn’t have the “no-noise” treatment like the first UK CD and I do like it a bit better than the US CD – more hiss but a bit more life as well though not drastically better mind you but it is an improvement.

In 2000, Yoko Ono, John Lennon’s widow, released a remixed version of the “Imagine” album which I own on a gold CD from the Mobile Fidelity Sound Lab label.

Though mastered a bit to loud for my tastes, the remixed version of this album is nice to have as it gives the album a less dense sound than Lennon’s original mix (Lennon’s original mixes for his solo work all tended to sound dense with little stereo separation) and is fun to hear.

I think had they gone easier on the compression this CD remix would be terrific but as it is it’s an interesting side listen but I have to listen to it at low volumes as it’s a bit aggressive – but interesting nonetheless.

I still prefer Lennon’s original mix when I listen to the album but I do like to pull the remix CD out every now and again just to get a different listening experience.

I think that the remix is becoming a rarity as Yoko Ono went back to Lennon’s original mix for the last reissue of the “Imagine” album which came out in 2010.

I own the 2010 mastering as part of the “Signature Box” which contains all of Lennon’s studio solo work as well as a groovy 2014 SACD Japanese release that also uses the 2010 mastering which is my preferred CD release of this album as it just sounds superb!

The US 2010 version of “Imagine” sounds great as well and all of Lennon’s albums as reissued in 2010 on CD are the way to go for me personally as I want to hear the original mixes and these CDs sound the best – better than any previous CD versions of his work for sure.

I also own a nifty mini-CD version of “Imagine” that came out in 2007 which also  features the remix of the album but comes in a wonderful replica package that features a mini poster, postcard and inner sleeve just like the original  vinyl release.

Rumor has it that the new “Imagine” release is coming this fall which will contain outtakes and alternate versions of songs from the “Imagine” sessions so I can’t wait to see a press release detailing the goodies fans have in store from this new and hopefully ultimate “Imagine” package.

Until then, take a gander at some of the older CD issues I own (above) and until next time …  peace and be well!!!