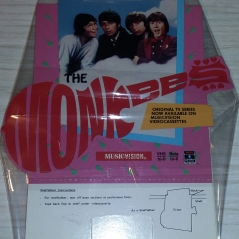 Okay hands up, anyone out there remember VHS tapes?

Now anyone out there remember Monkees VHS tapes?

Well for those perpetually curious about all things Monkees and those who want to see some actual Monkees VHS tapes, you’ve come to the right spot on the Web!

Today I’m taking a look back at some of the VHS tapes of The Monkees TV series that were released by Columbia Pictures in 1986 and 1987.

You see, in 1986 The Monkees returned to the pop landscape in a HUGE way! And that my dear friends was a weird and wonderful thing.

If you were born in the late 1960s or earlier and lived through the 1970s you would be hard pressed to see any way in which The Monkees could ever possibly become one of the hottest acts of 1986.

Until 1986 The Monkees were seen by many, especially the rock press and critics, as cardboard cutouts that leaped off of cereal boxes to hoist their evil corporate-run hands onto radio and record sales stealing the limelight from more legitimate acts.

No seriously, The Monkees were scorned.

Most “hipsters” even at the mere mention of the group mockingly sung the TV theme song (“Hey, Hey, We’re The Monk -ees”) and then proceeded to laugh the group off. The Monkees were seen as merely a kids TV show that should be consigned to the past – end of story.

That is until MTV started playing The Monkees TV series in early 1986 and The Monkees phenomena started a major phase two and a cultural rebirth lifted The Monkees from the scrapheap of time.

MTV’s exposure of The Monkees caused a huge demand for Monkees live appearances as well as all sort of Monkees products including vinyl, CDs and VHS tapes. At one point The Monkees had seven, yes seven, of their albums on the Billboard Top 200 charts at the same time!

And, as usual, I was there to eagerly soak up all of those various releases and revel in the most unlikely but satisfying return of one of my all-time favorite musical acts to TV (as well as cable) and radio airwaves.

Now while I really enjoyed The Monkees TV series, in 1986 I hadn’t actually seen it for several years, probably since the CBS Saturday morning reruns in the early 1970s.

For me The Monkees appeal was 85 percent driven by my love of their music and 15 percent by my memories of the TV show.

It was such a revelation to finally get to see all the episodes of the series when they ran on MTV and it was really nice to finally be able to own some of the episodes via the  release of the Columbia VHS tapes.

Each Columbia VHS tape contained two complete Monkees episodes and included two of my all-time favorite Monkee episodes – “I was a Teen-Age Monster” and “The Devil and Peter Tork” both of which I remembered seeing as a child on the Saturday morning reruns of the show all those years ago (cue the George Harrison song!)

I’ve come to really enjoy the series now that I can actually watch it whenever I want. Plus since it’s currently available in stunning quality on Blu-Ray I can enjoy the madness of the series even more because the color really pops off the screen like a Andy Warhol painting (more on the Blu-Ray box set in future posts!).

BUT in 1986 Columbia pictures (who then still owned all the group’s output on TV and record as well as their name) put out these few VHS cassettes and at the time I was thrilled to have them.

I’ve since transferred these VHS tapes to recordable DVD and they still look pretty darn good – not great but good.

Rhino records bought The Monkees catalog in the early 1990s and later issued the complete series on VHS and DVD and those looked even better but the original Columbia VHS tapes look just fine – if you can still play them that is.

I’ve put photos above of the five Columbia VHS Monkees tapes that I own. Included is a groovy sheet from Rhino advertising their Monkees audio catalog reissues from that time period (which came in one of the VHS tapes) and a really nice promotional display card for the VHS tapes that folds open to advertise the tapes in a store.

I just found the VHS display card this past weekend at an antique store which prompted me to drag my VHS tapes from the darkness of storage out into the sunlight to make this blog post.

Until next time be well and