Hype sticker for original US vinyl

Rear cover of US original vinyl 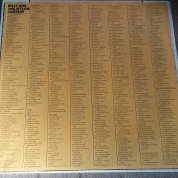 Inner sleeve of US vinyl

Side 1 label of US vinyl

Side 2 label of US vinyl

Rear of Japan for Europe CD 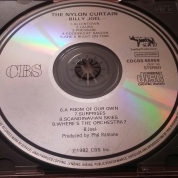 Disc of Japan for Europe CD

First US CD Made in Japan

Disc for first US CD Made in Japan 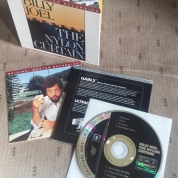 In keeping with remembrances of the past, this blog post is the first of what I’m calling my “Year in Your Ear” series.

“Year in Your Ear” posts will focus on some of my favorite albums from a particular year and for this debut post I chose 1982.

1982 happens to be a very sentimental year for me as  I was a sophomore and a junior that year and several of the albums from that time are still pretty special to me. There’s something about your high school years that sticks with you throughout time – even if I wouldn’t give you a nickel to relive them.

The first album from 1982 I’d like to highlight is one of my most played albums from that year – Bill Joel’s “The Nylon Curtain”.

For me, this is Billy Joel at his absolute zenith. I love quite a few of Joel’s albums – “The Stranger”, “52nd Street”, “Glass Houses” – but this album holds a special place in my heart.

For one, I think this album has Joel’s strongest collection of songs: “Pressure”, “Goodnight Saigon”, “Allentown”, “Where’s the Orchestra?”, “Surprises” and “She’s Right on Time” are all in my list of top songs written by Billy Joel.

Coming out in the Fall of 1982, this album was in heavy rotation for me from September until December of that year.  As it happens this album was also released at a particularly emotional time for my family.

You see my grandmother, the only grandparent I ever knew and who lived with my family, passed away in early November of 1982 at the age of 92.

I was very close to my grandmother and though her death was one of the most peaceful and graceful passings I have ever witnessed, it was nonetheless very sad.

I remember many a night in early December playing this album in the darkened room of my parent’s basement – over and over again.

The song “She’s Right on Time” with its references to putting up Christmas trees really hit home at the time and nowadays whenever I hear that song it brings me back to that darkened room – once again still and reflective and unsure about the future.

Needless to say this album will always hold a special place in my heart and the fact that it’s Joel’s strongest collection of tunes doesn’t hurt either.

All of these versions of the album sound good but my most played are the vinyl (you can’t beat the warmth of the first pressing) and the excellent MFSL CD issue.

Somewhere I own a another early U.S. CD pressing in its original longbox but I can’t seem to locate it at the moment. If I do I’ll add it to a later post.

There will be more Billy Joel albums highlighted in future posts but I thought I’d start at the top with “The Nylon Curtain”.

Seeing how it’s the beginning of February I guess the Christmas tree will have to wait a few more months.

I may take a spin into the darkness anyway by putting this album on and letting the past flood over me.

Safe journeys until my next post and may you find light in your darkest nights  – TTFN!