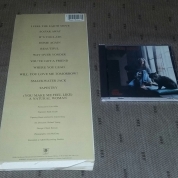 Rear of longbox and CD of first US CD 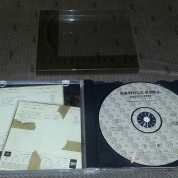 SACD with Multi-channel and Stereo 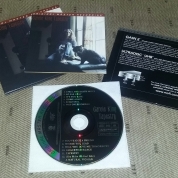 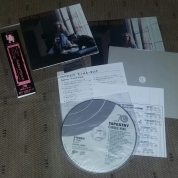 Isn’t it funny how certain songs can evoke such powerful sense memories?

I’m thinking of one song in particular, “It’s Too Late” by Carole King from her seminal album “Tapestry”.

It was 1971, I was five years old and every time I hear”It’s Too Late” I’m transported back in time to the large blue Ford station wagon my mother used to drive.

Now, this was not like today’s cars. This station wagon one was hulking piece of metal that seemed to dominate every road it was on – at least to my memory.

“It’s Too Late” was constantly on the radio from the spring of 1971 onward and it seemed as if it was played at least every five minutes.

My mother always listened to WOWO radio, an AM radio station in Fort Wayne that broadcast in 50,000 watts in those days. I have very clear memories of driving with my mom on rainy days looking out the window as the drops of rain pooled down the glass while listening to this song on the ever trustworthy WOWO.

Now at five years old I had no idea of the meaning of the lyrics for “It’s Too Late” which detailed a broken relationship, I instinctively picked up on the melancholy of the tune and the sadness in King’s voice. I’ve always been a sucker for melancholy even as a child.

Anyway, long way around, this blog today highlights all the different pressings  – CD and vinyl – that I own of Carole King’s monumental album “Tapestry”.

I know some people brush this album off as it has become such a monster in sales, over 25 million sold worldwide I think, and that it inspired the singer-songwriter movement of the 1970’s which some see as bland.

For me “Tapestry” will always be a transformational album and one I return to often for sonic solace. It’s full of great Carole King songs from throughout her career and the feel King puts in her weather worn vocals just moves me every time I play it.

Of course, as a collector, I’ve been inflicted by the disease of “betteristis” in which I continually look for the best sounding version of a favorite album until I find “the best” lol.

Sooo, that means I own several different versions of “Tapestry”.

(Note, You may ask why I don’t get rid of the older versions but as you see I am somewhat of a music hoarder and then there wouldn’t be this blog. Can anyone say rationalize?)

The first version I owned of this album was actually the first CD issue which came in a longbox in the mid-1980’s (yes, I still have the longbox – see photos).

The album is no sonic wonder to begin with but the first CD issue was a bit lifeless with more distortion on the vocals then later CD issues. Not bad but not great either. Thus the search for better sounding versions.

I recently found two vinyl pressings that sound really nice – a 1970’s Ode issue and a later Epic records issue. Of the two I prefer the Epic which sounds lovely and is really clean and quiet.

The best sounding versions I own, two versions that are pretty much equal, are both SACDs.

SACD stands for Super Audio CD and requires a player that plays them. A lot of high end CD players can play them and there are several DVD players with SACD capability.

SACDs are basically a Hi Resolution format that gives you the most resolution you can get from a compact disc.

Most times the SACD version of a particular album has been remastered as carefully as it can be and sounds as good as that album can in the CD format.

Of the two SACDs I own – one released by Sony and one released by Mobile Fidelity Sound Labs (MFSL) – I tend to play the MFSL version the most. Both are excellent and pretty much equal in sound. The MFSL CD is also a hybrid disc meaning it has different layers – one for regular sound and one for SACD Hi Resolution sound.

The regular layer can be played on any CD player but to hear the SACD layer you’ll need an SACD player.

Really, the only version that sounds a bit dull is the first issue CD version. As I said it’s not bad but the other versions I own are better.

The best packaged version by far is the 2007 Japanese Mini-Lp CD which has all the original inserts in miniature including the original inner sleeve. Sound wise it’s identical to the later reissue with bonus tracks and sounds really nice.

The most recent reissue of “Tapestry” is a 2 CD set which comes with a vintage live performance of the whole album which is well worth picking up. The concert is great so that might be worth the double dip if you already own the album on CD.

If you get a vinyl issue I’d highly recommend tracking down an Epic Records pressing from the 1980s as they sound really sweet and aren’t too expensive – I’ve seen them used for cheap a few times.

So enjoy my Carole King “Tapestry” fest! There are photos above to peruse my indulgences.