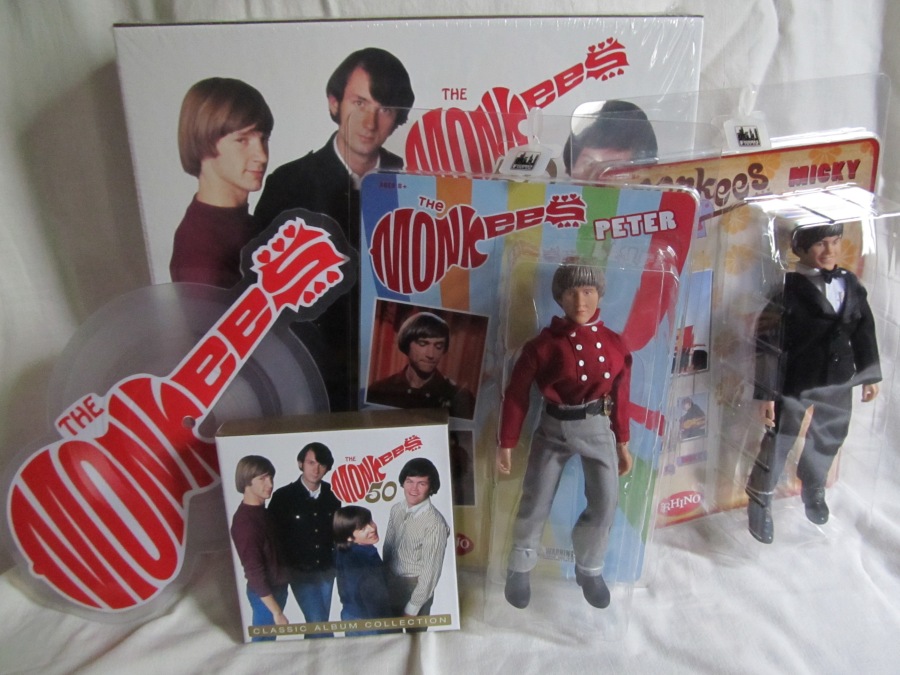 And now for something completely different …

I know the 50th Anniversary posts a keep a comin’ but since there are so many fun anniversary releases that have come out in the past few years I just can’t resist posting photos and stories of  them.

Since I didn’t have this blog two years ago, I thought it might be fun to do a quick overview of some of the special items that came out in 2016 for the 50th anniversary of The Monkees TV show and recordings!

And of course I, as usual, happened to snag quite a few of the record and memorabilia that came out that year and above and below you can take a gander a some of my favorite releases from that year-long Monkee fest (has it really been two years already?!!)

As you can see, record releases were full of color that year! One of my favorite releases was the box set of all colored vinyl called the Classic Album Collection. It came out as part of Record Store Day that year and was also released in a cool CD version that was available at independent record stores.

There was also a special blue vinyl copy of The Monkees first album available at FYE record stores as well as a special red vinyl copy of “Live 1967” that was sold through the Collector’s Choice Website (see photos of each).

Note: FYE also issued an exclusive version of the Monkees “Good Times!” CD which included Peter Tork’s song “A Better World” as a bonus track. You can see the rear of that CD in the photo of the FYE blue vinyl copy of “The Monkees.” lp.

There were some questionable releases like the cereal box reissues and dolls which were both fun but not necessary. As you see I did buy them  – a sickness I know.

I guess you can also include the reproduction of Micky Dolenz’s, as he calls it table cloth, poncho that was sold with merchandise tables at tour stops on the Monkees 50th Anniversary Tour which hit my town earlier that summer.

I did also manage to interview  Peter Tork for the second time and write a couple of articles about the “Good Times!” reunion album.

Click below if you want to read any of those articles or listen to my interviews with Peter Tork:

All in all it was a fantastic year and one of the best celebrations of The Monkees and truth be told maybe one of my favorite reunion years because the “Good Times!” album was so good and I got to help promote it through my work as a journalist.

Oh, and the mother of all Monkees releases (IMHO) also came out that year – the Blu-Ray box set of all the Monkees TV episodes which included their movie HEAD and 1968 TV special 33 and 1/3 Revolutions Per Monkee! I just included a small photo of the discs as I plan to do a later post highlighting the box by itself.

So feast your eyes on some groovy 2016 Monkees items! 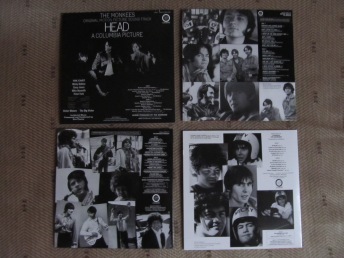 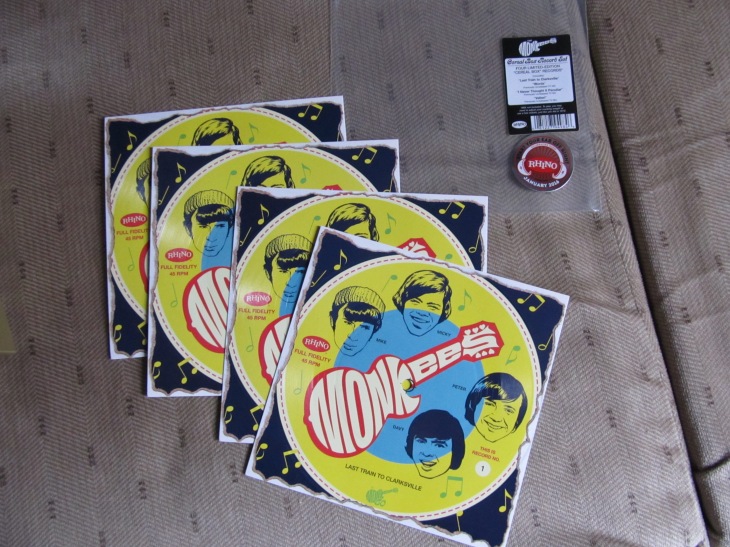 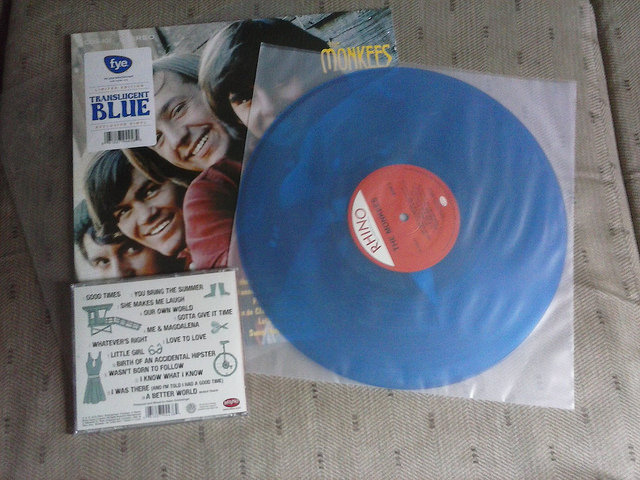 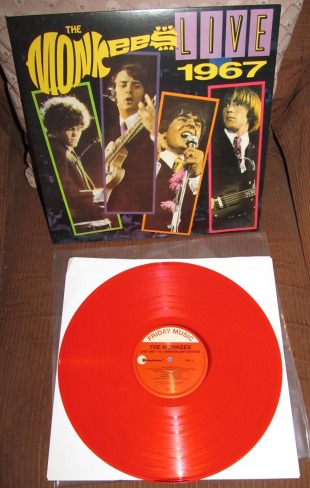 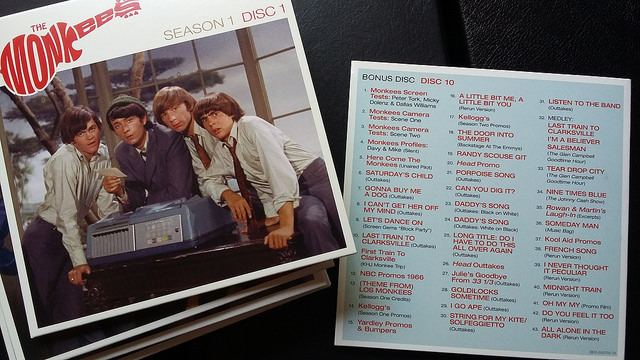 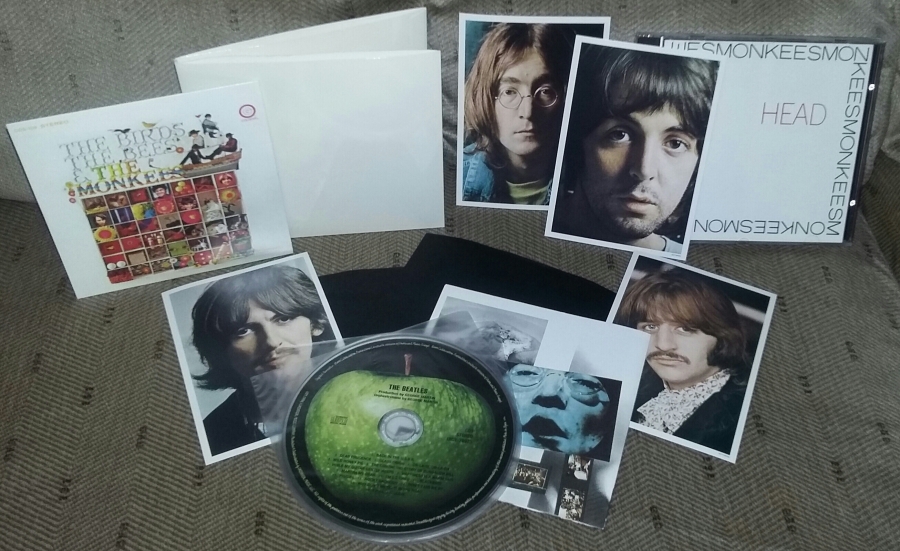 This is my first blog post of the new year and as I get older these years do seem to pile up faster and faster just like my mother and grandmother once warned they would.

Seeing as my own birthday is just around the corner, I’m a January baby, I thought I’d start the new year off by celebrating another set of birthdays – the 50th birthdays of three of my favorite recordings:

The Beatles self-titled 2 Lp set (nicknamed the “White Album”) and The Monkees two 1968 albums “The Birds, The Bees & The Monkees” and “HEAD”.

Though I was only two years old at the time these albums were released, these three records have nevertheless through the years seemed like a turning point in my appreciation for both The Beatles and The Monkees music.

You see even in 1968 at the tender age of two I was listening to Monkees records, courtesy of my oldest brothers now worn discs, and was somewhat familiar with “The Birds, The Bees & The Monkees” when it was first issued.

I didn’t discover the White Album and HEAD until the mid-1970s but I distinctly remember that as a young pop music fan and a fan of Top Forty radio all three of these albums elicited the same mixed reaction on my first few listens: pleasure and fear.

You see all three of these albums while containing some lovely pop classics also contained some rather somber and disturbing numbers as well.

Starting off with “The Birds and The Bees & The Monkees” which, while containing two of the groups most lovely pop songs “Daydream Believer” and “Valleri”, also contained such head scratchers as the over five minute long Mike Nesmith sung and composed “Writing Wrongs” as well as his 1920’s 78 r.p.m tribute “Magnolia Simms” and the psychedelic “Auntie’s Municipal Court”.

I remember at a young age reveling in the pop numbers on this album but skipping the needle over some of the rest which distanced me from truly loving this record until I was much older.

After all where were the fun loving Monkees who were too busy putting people down!

Of course in retrospect this album is the point where a good number of the general public began to lose their affection for the group as well but thank goodness for the weirdness!!!

I think if The Monkees had never taken the left turn from their earlier well crafted pop albums, HEAD most importantly, we might not still be talking about the group over fifty years later.

These two albums are where the band members began to find themselves musically and branched off from being a TV creation into a musical entity.

The same mixture of pleasure and hesitation greeted me when I discovered The Monkees HEAD album which was the soundtrack to their totally un-Monkee like movie of the same name which REALLY perplexed me.

Again, I have grown to truly love this album and find it and the HEAD movie as a true glimpse into the movement in the late 60’s away from the fantasy and lightness of film, TV and recordings from the late fifties and early 60’s to the gritty reality that was creeping into pop culture at the time.

Now some of the weirder tracks on The Birds and Bees and HEAD are some of my favorite Monkees recordings and I tend to listen to them more than the poppier numbers.

But of all three albums in this post it took me the longest to truly warm up to the Beatles epic White Album which I first heard around 1976.

Don’t get me wrong, I loved many of the songs on it from the first go but there were several tracks that down right frightened me such as “Helter Skelter” (with its unfortunate Charles Manson association), “Yer Blues” and the mother of all weirdness “Revolution 9” which to this day still seems like a window into a bad dream lol.

Throw in the weirdness of “Honey Pie”, “Why Don’t We Do It In the Road”, the starkness of “Happiness is a Warm Gun” and “I’m So Tired” and the giddy sarcasm of George Harrison’s “Piggies” and my ten year old self felt as if I had been thrown into a reality that wasn’t quite comfortable or enjoyable at times.

BUT as time has gone on and as I have grown older all these songs I’ve mentioned as well as all three albums have now found as place as some of my most cherished and played music.

As an adult I really appreciate the grittiness and starkness of a lot of the tracks on these albums and looking back they all seem to stand out of time, especially the White Album and HEAD, and tower above most other pop/rock recordings of the era.

So here’s to the 50th of all three of these classic albums!!!

I will focus on each album individually when the actual date of their 50th anniversaries arise throughout the year and spotlight different pressings I own of each.

Until then let’s just look forward to 2018 and hopefully some of you out there will celebrate or discover these albums for yourself.

Below are photos of some uncommon CD pressings I own of these three albums including the first CD issue (from Japan) of “The Birds, The Bees & The Monkees” and the rare UK issue of HEAD on the Lightning label featuring an alternate mix of “Circle Sky” and the Japanese SHM-CD issue of The Beatles featuring a nice mini-Lp sleeve with all the original posters and inner sleeves in miniature.